Dedicated to Patrick A. Cooper. Rest in Peace, my friend.

Good morning and welcome to December. It’s time for a new Wrestling Q&A and thanks to The Cheese, I have ten new questions dealing with racism, bullying, the Wednesday Night Wars and so many other things. It should be a good one. So enough of the jibber-jabber. Let’s do this.

Was WWE right to grant Jordan Myles his release? What are your thoughts on the whole situation with WWE and Myles?

If Myles, or ACH as he’s called now, didn’t want to be there and thought he was in a bad and racist atmosphere, then by all means, let him out of his contract and go elsewhere to pursue his career. WWE doesn’t need someone who isn’t happy and working against the company as Myles definitely was. As for the whole situation in general, I think the guy has issues. If he wasn’t happy with the shirt that he apparently approved, he should have gone through the channels to work the situation out. Going into rants online and screaming racism doesn’t help anyone and was about as childish and unprofessional as a person can get and in the wrestling business, that’s saying something. Good riddance to bad rubbish.

Where would you rank The Revival among the tag teams in WWE?

Along with the Usos and the OC, the Revival are definitely among the top teams in the company and in terms of in-ring technique and keeping it real, I’d say they’re arguably the best.

How about tag teams of all time?

In terms of wrestling tag teams, the Revival still have a ways to go to be put up there with the Midnight Express, The Road Warriors, The Horsemen, The Andersons, etc, but they’re damn good and getting better every night. They’re not Top 5 yet, but they would certainly rank in anyone’s Top 15 of all time and they’re getting better and better all the time.

I don’t think Jim is so much racist as he doesn’t suffer fools well. I don’t know Cornette personally, but I don’t see skin color being a problem when it comes to dealing with wrestlers and doing his thing. He’s an equal opportunity offender and if you’re stupid or a mark for yourself or what he sees as demeaning to the business he loves, he’s going to crack on you and give you hell. Race isn’t a factor. Character, or lack of, is.

Who do you feel is to blame for Cornette’s comments / bad joke making the air on NWA Powerr?

Well, it was a joke, albeit a bad one, that Cornette has used a thousand times. He shouldn’t have used it in today’s politically correct, everyone is offended mindset society, but he did. But then it went through several editing processes and made air and no one one in NWA Management caught it or thought to remove the line. Corny probably shouldn’t have made the tasteless joke, but if NWA officials had been doing their job, a simple edit would have cleared it up and it would have been end of story. Dave Lagana and the NWA dropped the ball on this one.

Should Corey Graves be punished for his tweet directed at Mauro Ranallo?

If he was intending to be an ass and went after Mauro for the sake of being an ass, then yes, but that was not his intentions. They were in the midst of inter-brand rivalry and people from every roster were taking shots at others on the different rosters. It’s called building a story and making things more interesting. From what I understand, Graves has apoligized and he should probably be more careful about who he tweets to, but I think that this should be the end of it.

On the other side of that, should Mauro Ranallo get a thicker skin and quit letting things get to him?

That’s the thing about depression. It’s easy to say get a thicker skin and get over it, but unless it’s something you have dealt with and know about, you need to understand that it’s not that easy. For Ranallo, he’s had problems with being “bullied” by JBL and left Smackdown for that reason. Then he went to NXT and now, he’s missed the Survivor Series and some NXT tapings again because of someone being mean to him. I feel for Mauro to be sure since I also deal with depression and anxiety and have for many years, but he’s in a tough business that has a lot of strong and dare I say it, overpowering personalities and if he can’t take the heat, then he might not need to be there. Maybe it’s just me because despite dealing with my issues, I’ve never missed a day of work because of it and my responsibilities come first. I might not want to do it, but that’s why I get a paycheck and it’s my job. Mauro, despite being one of the best announcers in the business today, just doesn’t get that. If he can’t go to work because of a mean tweet, he’s in the wrong line of work and needs to go work in a cubicle somewhere, avoiding people and any interaction. I sound like an ass and I know that, but if Mauro is going to work at WWE as the lead announcer of one of their live shows, he needs to learn to suck it up and do his job and if he can’t, then he doesn’t need to be there.

If it’s a build to a future angle between the two and maybe a match at Mania, then I’m all for it, but if Seth is, as it seems, just going into business for himself, I don’t see the point and it’s wasting everyone’s time, building for something that isn’t going to happen. Seth should move on to other topics and people instead of trying to pick a fight with Punk.

Should NXT move from Full Sail and become a full touring brand like RAW and Smackdown?

One of the things that makes NXT so special is the magic and support that is Full Sail. It’s part of what sets them apart from the other two brands. While I can see, for the sake of costs and making money, NXT eventually switching to doing the arena shows, I hope it’s still some time away in the future. If it’s not broke, don’t fix it and right now, NXT’s relationship with Full Sail isn’t broke. Leave it as it is and let it be.

Do you watch AEW Dynamite?

Personally, I don’t. I don’t get home from work until around 9:00 pm and to be honest, I prefer to watch NXT Live. When they did the replay immediately after the original airing, I did watch AEW, but they quit that and now I just read the recaps and then go find the stuff that caught my attention over at YouTube. If it involves MJF, Cody, Jericho and the Inner Circle or Orange Cassidy, I go look it up and watch. But the full show, not so much.

And there you go. My thanks again to Cheese for the questions. Any thoughts, comments or questions of your own, drop me a line in the comment section or send me an e-mail at Doug28352@yahoo.com. Thank you for reading. And until the next time, take care of yourself and I’ll see you at the matches. 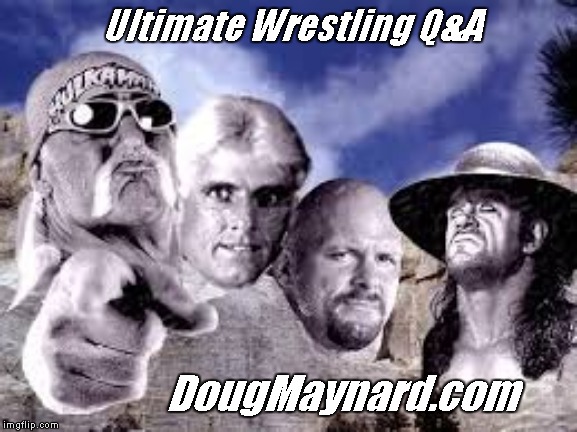