Coming up on Saturday night, it’s Impact Wrestling’s Slammiversary pay-per-view, airing on FITE.TV and all other PPV outlets. And of course, that means it’s prediction time. So are you ready? Let’s do this…

Competitors mean more than one person and I could easily see Impact adding two or three names as surprises and instant top stars for the company. Maybe EC3? Maybe Eric Young? Hell, maybe even Carlito. That would be cool. But regardless of who the surprise additions are to this match, it’s the main event for the Impact Wrestling World Championship, recently stripped from the now-terminated Tessa Blanchard. Impact needs a strong champion to rebuild after the disaster that was Tessa as the champion and not defending for three months. I think the next champion will be one of these mystery competitors that is added to the match. I’ll go with EC3 returning in this match and winning the belt, thus becoming the new champion.

Honestly, I don’t even know anything about Deonna Purrazzo or who she is. Not a clue at all. I do know who Jordynne Grace is. She doesn’t impress me, but she has the belt and I think she’ll keep it here.

I see the stipulation with Johnny Swinger and for some reason, I’m thinking about Ric Flair in a dress trying to get involved while hiding out in the crowd. (Look it up!) Mack is popular with the fans and in today’s world of BLM, a man of Mack’s stature is not going to lose. It probably wouldn’t go over too well and cries of “racist” would blow up Twitter. Sorry if I’m sounding bitter, but I just took a look at my Twitter feed and the politics and unrest in our nation is insane. My apologies. Mack retains and we move on to the next feud.

The North has been the top tag team for Impact Wrestling for a long time and I think it’s time to shake things up a bit. The build has been great for this match and I think we’re in for a good match and some interesting moments. The title is going to switch hands here.

Gauntlet Match to crown Top Contender for Knockouts Championship: Madison Rayne vs. Kimber Lee vs. Rosemary vs. Neveah vs. Su Yung/Susie vs. Kiera Hogan vs. Taya Valkyrie vs. Tasha Steelz vs. Alisha Edwards vs. Kylie Rae vs. Jessika Havok

Most of these women are just there for filler and we can eliminate anyone not named Madison Rayne, Taya Valkyrie, Rosemary, or Jessika Havok. I think the final two will be Valkyrie and the returning Madison Rayne. It’s a big moment and big comeback for Rayne, fresh off a stint from Ring of Honor. I think she’ll ride the momentum and as a homecoming present, she’ll take home the win and be the new top contender to challenge Jordynne Grace at a future date. Watch and see.

Old School Rules means “extreme” and “no rules”, a crazy and chaotic garbage match. Dreamer takes Moose to the limit, but I don’t think a run with the TNA Championship lies in Tommy’s future.

The Rascalz, Wentz and Dez, have issued an Open Challenge.

And this is where we see Rhyno answer the challenge, along with a partner from the past, a man “with kids”. And The Rascalz, they fall victim to the GORE! GORE! GORE!.

The promised return of a former World Champion and more.

I’ve already told you. EC3 is coming back. And maybe Eric Young too. That’s the big returns. So there you go.

And that’s all folks. My thanks for reading. Comments, thoughts, and any questions feel free and drop me a message in the comment box below, at my e-mail, Doug28352@yahoo.com, or on Twitter at @Doug28352. Are you watching Impact Wrestling and Slammiversary? It looks like it should be a good show with lots of surprises. I’m looking forward to seeing what transpires. And with that, I’m out of here. Have a great one and I’ll see you at the matches. 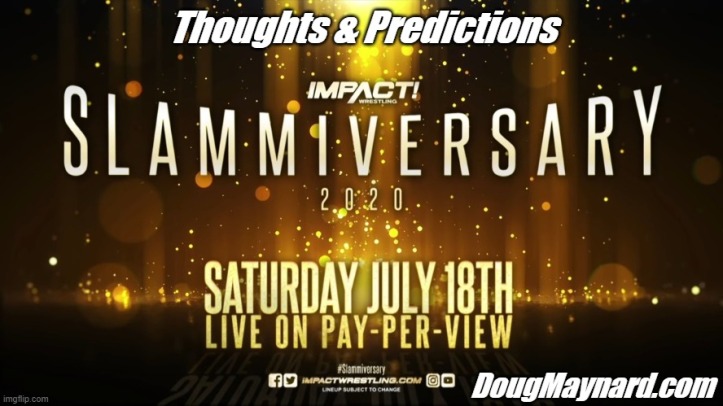