Coming up tomorrow from The Amway Center in Orlando, Florida is WWE Summerslam, the 2020 edition. And of course, that means I have to do a few quick predictions. So are you ready for the biggest party of the summer? Let’s do this…

It’s pretty simple here. Randy doesn’t need a title belt and he’s pissed off a lot of legends on the way to this match. It’s too soon for Drew to lose the belt and give up the championship. So look for some great mat action by Randy, maybe even an RKO or two, but then some distractions by the likes of Christian, Big Show, HBK, and maybe even Ric Flair and Randy eats a Claymore for dinner. Snatching a victory from the jaws of defeat, Drew makes the big comeback and wins to retain his title.

It was noted just before I started writing this that a “Falls Count Anywhere” stipulation has been added to the match. To be honest, and I hate to say this about a Bray/Fiend match, but I just don’t feel any anticipation here and could care less. Braun should never have gotten the belt to start with and Bray should never have lost it to Goldberg so I’m saying that tomorrow night, the belt comes home via The Fiend Express. A strange match and lots of smoke and mirrors and Bray will walk out with the WWE Universal Championship one more time.

No one is ready for Asuka and she never should have lost the RAW Women’s Championship, to begin with. Asuka wins and wins quickly to defeat The Boss and capture the Red Brand’s title.

The Street Profits as Champions has done absolutely nothing for me, but I do like the team of Andrade & Angel. I see gold in their immediate future.

Why is MVP challenging for the title when Shelton beat Crews at least twice in recent weeks? It should be Shelton as the challenger. I guess this is a just a swerve to see if Cedric Alexander joins the Hurt Crew or not. This whole build-up confuses the hell out of me. Apollo retains or else, what’s the point?

There is no way in hell that Dominik should win here. He should put up an amazing fight, get some retribution on Seth and give the fight of a lifetime that impresses everyone with a never-say-die attitude, but the experience of Seth should come out on top. But this is WWE and when does what should happen actually happen? Exactly. Look for Seth to hesitate for just that split second and Dominik will steal a win.

No one is ready for Asuka, but since she already has one match to wrestle aside from this one, I think Bayley will find a way to retain and keep her belt. Sasha won’t be happy, but Bayley stays a champ.

After everything that’s happened in the past few days for Sonya, I think she may need some time off to handle personal matters. Mandy scores the win and the two embrace immediately afterward.

And there you go with my predictions. My thanks for reading. Any comments, thoughts, or questions to ask, feel free, and use the comment box below, or drop me a line. Take care of yourself and stay safe. I’ll see you at the matches. 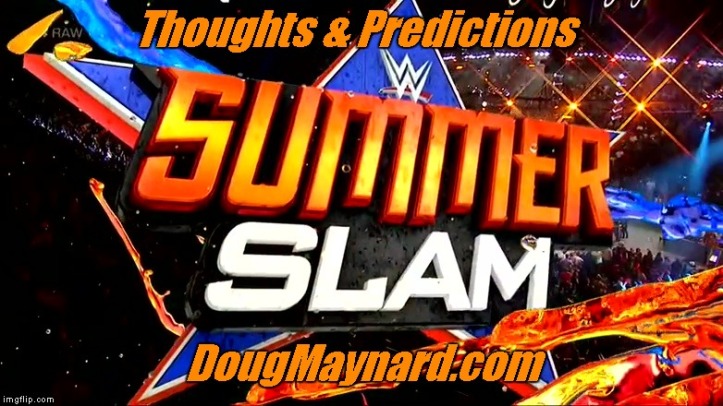