Happy St. Patrick’s Day and welcome to a very special edition of the Tossing Salt Wrestling Q&A. My buddy John, who like me grew up here in NC and was a big fan of Mid-Atlantic Championship Wrestling and Crockett Promotions, decided to send me a few questions about some of the stars and talent that made up JCP. My thanks to him. So it’s all about the best territory and the pre-WCW glory days. Let’s do this.

“Number One” Paul Jones held tag team championships with three different partners – Rick Steamboat, Baron Von Raschke and the Masked Superstar. Which team was, in your opinion, the best and why?

Jones, during his career, also held tag team gold with Nelson Royal, Wahoo McDaniel, Bob Bruggers and Tiger Conway Jr. Of the three teams you mentioned, my personal favorite was Jones pairing with Superstar. I’m not sure why exactly because there was an obvious contrast in styles and they were an odd combination that is largely overlooked in the history books, but they were effective as a team and held the NWA World Tag Team Championships on two different occasions. Jones team with Steamboat was doomed from the start as Steamboat was obviously jealous of Jones from Day 1 and even though they had a lot of success together, Steamboat eventually ended up turning on Jones at the end of a battle royal in Raleigh, NC and the team imploded. At least that’s how Jones described it and I’m not going to dispute him. Jones & Von Raschke was another odd pairing and also one of my favorites that on paper, shouldn’t have worked, but did and did so very well. Their promos were fun as Jones would mainly talk about himself and Raschke, seemingly oblivious to the remarks he probably should have taken offense at, would just agree and say, “that is right”. Jones was highly underrated as a tag team wrestler, but was very effective and had a great career in both singles and tag team action before injuries forced him to retire and become a manager. In my opinion, tag team action was actually where he was at his best and the many many times as a tag team champ, with such a wide assortment of partners, seems to prove me right on that.

How would you rate Gene Anderson as a manager?

I remember when Gene made the transition from wrestler to manager and I thought it was weird that the tag team wrestler who rarely spoke would be acting as the manager and spokesperson for other wrestlers as their manager, but he did it and was effective and did a good job, leading Ray Stevens & Jimmy Snuka to tag team gold, as well as helping to guide the careers of Masked Superstar, Ivan Koloff and the Iron Sheik. Gene only acted as a manager with his “Army” for a couple of years, 1979 – 1981, before reforming the Minnesota Wrecking Crew with Ole Anderson and returning to in-ring competition. So there isn’t much a a track record to look at, but Anderson had an impact and made his mark and legacy in the Crockett area during his brief managerial run. If he hadn’t decided to get back in the ring, I think he could have had a long and very fruitful career in the managerial role as well.

Mosca Jr. only wrestled for a couple of years before choosing to leave the business and become, I believe a teacher, but for the very short time he performed in that ring, he was actually quite good and had some good success winning the Mid-Atlantic Championship three times, switching the title with Ivan Koloff twice and then finally dropping it to Dory Funk Jr., who was wrestling under the name “The Masked Outlaw”. I can’t remember if he went down and worked in Florida a few shows, but mainly late 1983 to 1985 were the only years that Mosca Jr. was active. Unlike some second and third generation wrestlers who got pushed and couldn’t handle it or didn’t deserve it, Mosca Jr. had the talent and ability. He could have been big in the business, but decided instead to just move on.

What did you think of Ray “The Crippler” Stevens and his time in JCP?

Ray’s career was beginning to wind down when he came to the Carolina’s and JCP, but he had a good run, holding the NWA World Tag Team Championship with Jimmy Snuka, as well as (briefly) teaming with Ole Anderson to defend those titles (replacing an injured Gene Anderson). Splitting from Ole helped turn Stevens into a face, a role he would play for the remainder of his career, and he also worked the two JCP shows doing commentary. I never had the chance to see Stevens during his prime years in the AWA and on the West Coast, but the couple of years he spent working here out of Charlotte definitely made me a fan of “The Crippler”. His “Bombs Away” kneedrop was a thing of beauty and he was a definite legend in every way, shape or form.

How would you rank “King Kong” Angelo Mosca as a legit tough guy?

His nickname, from playing in the CFL (Canadian Football League), that was given to him by the other players, was “Big Nasty”. I think that says it all right there.

Does Penny Banner belong in the WWE Hall of Fame?

A former AWA Women’s Champion and one of the best female performers of the sixties and seventies, Penny Banner, the former wife of NWA and JCP legend Johnny Weaver, is definitely a lock for any wrestling Hall of Fame, period. She wrote a book a few years ago before her passing, called “Banner Days”, that every wrestling fan should try to read. As for the WWE Hall of Fame, unfortunately Banner’s name isn’t well remembered and since she was not one of Moolah’s girls, I don’t think she would be on WWE’s radar, but as a “Legacy Inductee”, I can definitely see her going in and not if, but when it happens, it will be an honor well deserved by an amazing performer and incredible woman.

Aside from Paul Jones, what was Jimmy Valiant’s best feud?

Easily the battles against Jerry Lawler over in Memphis, but since this is a JCP Q&A and I’m pretty sure that the question is all about the “Boogie Woogie Man” and his time in the Carolinas, I’ll just say “the managers”. Before settling in to a five year battle with Jones and the various members of his “Army”, Valiant had many wars against the “House of Humperdink”, led by the man himself, Sir Oliver Humperdink and also the great Gary Hart and his warriors, the Great Kabuki and the Dragon Master. Valiant, who initially began his run in Crockett as “King” James Valiant and just happened to be managed by Lord Alfred Hayes, was the go-to guy for Crockett to keep the evil managers in check for the territory. If any manager tried to get too much power, Valiant would be there danging around to thwart his efforts. It made for some great stories and great matches.

And there you go. It felt good getting a little nostalgic and taking a trip back in time this morning. Any comments, thoughts or questions, please drop me a line and give me a shout. My thanks for reading and again, my thanks to John for the questions. Now send me more. Until the next time, take care and have a great one. I’ll see you at the matches. 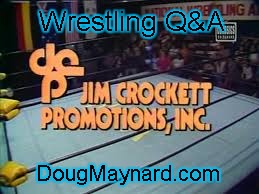