My buddy Adam and I recently had a great conversation about the things in life that matter most, comics and movies. Several gems of questions came forth from that young man’s sexy mouth and now, it’s time to answer them for all to read, here in what we call “5 Questions”. Let’s do this…

If you were to do an MCU “Secret Wars” movie, based on the comic, what characters would you use for the heroes and villains in the story?

Obviously the movie, based on the current MCU and the comic, which was epic for it’s time and featured a “Who’s Who” of heroes and villains, would have totally different characters being featured. I’m not going to include the Fantastic Four or the X-Men because, quite simply, they’ve yet to be introduced into the MCU and even though we know they’re coming, they’re not here yet and neither would be their rivals such as Dr. Doom, Magneto, Galactus, etc. So here’s the deal. The Beyonder discovers the MCU and decides to arrange a little war between heroes and villains. For the heroes, he summons Captain America, The Falcon, Ant Man and The Wasp, Winter Soldier, Hawkeye, Dr. Hulk, War Machine and Spider Man. From the streets of NYC, he calls forth Luke Cage, Jessica Jones, Daredevil, Iron Fist and Coleen Wing. And since he’s all-powerful and can do so, he realizes that they’re missing, he goes through time and brings back Tony Stark, Elektra and The Black Widow from the dead. And then he needs to bring in some bad guys. Ultron, The Sandman, Carnage, The Green Goblin, The Kingpin, Red Skull, Killgrave and Loki. And then, let the Secret Wars begin.

After Endgane, how would you plot the next Avengers movie for the MCU?

The team that remains, which is Captain America (Sam Wilson), War Machine, Winter Soldier, Scarlet Witch, Captain Marvel, Ant Man, The Wasp, Hulk and Spiderman, go out recruiting new members for the team such as Dr. Strange, the heroes from the streets of NYC like Luke Cage and Jessica Jones and maybe a few others (Tigra, Hellcat, Valkyrie) and while doing this, also realize that all the time-jumping they did in EndGame has consequences, such as attracting the attention of Kang.

Would you rather see the characters in the cancelled Netflix Marvel seeries brought back as television series on a Network or as part of a MCU movie?

I would love to see them as part of a television deal, much like the CW’s “Arrowverse” where each show airs on it’s own night then we have regular crossovers under the “Defenders” title. But as I mentioned in my past two answers, there is definitely a role for the great characters that were Jessica Jones, Luke Cage, Iron Fist, Daredevil, The Punisher, Hellcat, Foggy Nelson, Elektra, The Kingpin, Coleen Wing, Stick and the others in the MCU. So long as they eventually come back, how it happens doesn’t matter so much to me.  And by the way, Season 3 of “Jessica Jones” is up on Netflix now.  I’m up to Episode 6.  It’s good so far and I would suggest you go watch it.  More great stuff and the people at Netflix are idiots.

What characters would you like to see used as part of James Gunn’s Suicide Squad II movie?

We know that Captain Boomerang, Rick Flagg, Harley Quinn and Amanda Waller are coming back. Deadshot (Will Smith) has passed on the option of returning for a second movie. So who can fill the void, character wise, left by the missing marksman. Killer Croc was awesome and I hope he sticks around. But for new blood, how about Captain Cold (from the Flash / Legends of Tomorrow series?). Jason Woodrue, aka The Plant Master, would be cool or if he’s too obscure, how about Poison Ivy? Mirror Master would be good. Dr. Light was great in the comics and could be interesting. Remember Lashina, aka “The Dutchess” from the comics? Having one of Darkseid’s “Female Furies” would be a good twist and could tie into the upcoming “New Gods” movie. Hell, have Jim Carey resurrect his role as The Riddler and provide some comic moments. There are so many great characters out there in the DCCU, but most of the well known ones are already in use. I’m sure that Gunn has been pouring through old comics and has found some gems for use of in this movie. Of that, I have no doubt.

What are three movies that you think everyone should see at least once?

“East of Eden”, starring James Dean, “Clerks”, which was Kevin Smith’s first time as a writer and director and this movie put him on the map and “Airplane”. It’s funny as hell, even dated as it seems to be now. It changed all the rules for what comedic movies can be. So find these movies and watch them. Enjoy. You’re welcome.

And there you go. My thanks for reading. Any thoughts, comments or questions, just drop me a line. Until the next time, take care and stay safe. Have a great one. 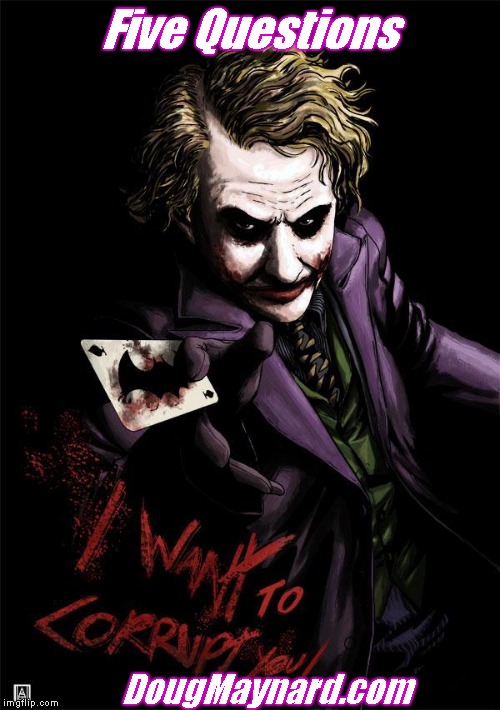