These have been sitting in a folder in my computer for quite a while and since today is clean-up day, let’s go ahead and get these gems, courtesy of Maxine and Pauly, out of the way. In other words, let’s do this…

Could The View survive without Whoopi Goldberg?

Whoopi is a strong part of the show, but with or without Goldberg, the show and the strength of it’s format is capable of, with the right people as part of the roster, surviving almost anything. I would actually love to see Whoopi and Joy take an extended (permanent) leave of absence from the show and take Megan with them. Abby can stay and Sunny is annoying and a hypocrite, but she’s not totally unbearable. How about Megyn Kelly as the moderator and some new blood for the show? Regardless of who is these, except for Rosie who should never be allowed on TV again, the View will go on and survive.

Should CBS cancel the show “Bull” over the sexual harassment allegations against star Michael Weatherly?

If CBS followed the examples set by ABC and Roseanne, then absolutely, yes. But different standards apply to different people and Weatherly is a CBS favorite and the show makes money so he gets a pass for being rude, crude and sexually harassing a co-star while Roseanne loses everything for making a bad taste joke on Twitter.

He can’t even run New York and is one of the most incompetent clowns ever to hold a political office. Even in New York, the people have no use for this billionaire botch artist. He’s a bad Mayor and wants to be a bad President that would make people long for the days of Carter and Obama in comparison. No! Just no.

Well, I’m off work today so that kind of cuts down on the idiot sightings, but how about this. A person, who is a crackhead and known for stealing lawn mowers, comes to the house last night and knocks on the window trying to get my attention. I don’t respond and he goes away. But now two lawnmowers that were on the carport are missing. And I guess he doesn’t think that we’ll know who took them? That’s pretty f*cking stupid. And a very bad decision by this person, Mr. Seals. He’s crossed the line one time too often and has been reported to the police. And he’d better hope they find him before I do.

Is foreplay and romance an important part of a relationship?

Absolutely! Otherwise, it’s just sex and while there is nothing wrong with that on occasion, it’s not good for long term deals. Be romantic. Give that back rub. Make the anticipation a big deal and it’s all more than worth it in the end.

If you had a show like “The Five” or “The View” and could select any four people as your co-hosts, who would you pick?

If I was given a chance to do a show of that nature, at least two of my co-hosts would be obvious and easy picks. For moderator, I’d want the host and master of all things SMF Cyberspace, Brent, to come and do what he does so well with every edition of his ultra-great podcast, moderate and guide the way. And for the other, I’d want an actor, comedian, singer and hip-hop spell-caster from New York City, the one and only Andrew Singer, aka Soce the Elemental Wizard. As for the other two spots, I’d install my current boss-man, a long time friend and wrestling superstar, Bill-Bill. And the final spot would be rotating with regulars from the SMF family, like Eric, Luke and Uncle Jonny, some of my associates from life in the ‘Burg like Youngblood, Rabbit and K-Mak and whoever else of the large number of eclectic personalities I can get to come aboard and be part of the fun.

What would be your ultimate dream wrestling match?

Hornswoggle versus Drake Maverick in a step-ladder match at Wrestlemania.

What comic book character, neither Marvel or DC, would you like to see made into a live action motion picture?

Back in the 70’s on Saturday morning, there was a show called the Shazam / Isis Power Hour where one part was about the DC hero, Shazam and the other was about a woman named Andrea Thomas who was the modern incarnation of the Egyptian goddess, Isis. The Isis character had a lot of potential and could be made into a kick-ass movie if done correctly. That would be my pick.

What are your warning signs?

When the smiles stop and I start to get quiet, trouble is brewing. And if you ever walk into a room and see me smoking without a beer being in my other hand, just quietly back away because it’s storm season fixing to kick it into high gear.

And there you go. My thanks for reading and thanks to Maxine and Pauly for the questions. Any comments, thoughts or questions, drop me a line either here at the site or at my e-mail at Doug28352@yahoo.com. Until the next time, take care and stay safe. Have a great one. 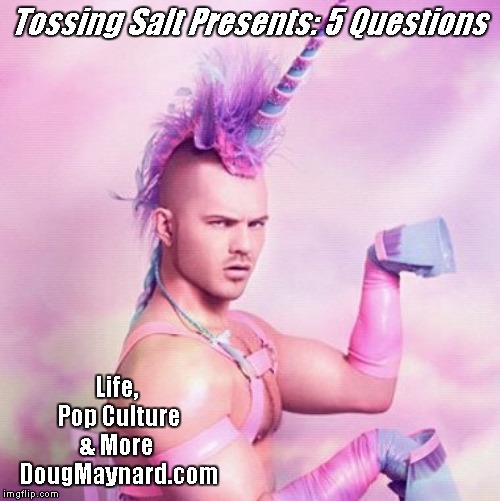