Coming up on Saturday, tonight, live on the WWE Network from Toronto, Ontario, Canada, is NXT Takeover: Toronto. And of course, that means it’s time to look into the Magic 8-Ball and do that prediction thing. So let’s can the chit chat and get to telling what will be. And away we go.

NXT Champion Adam Cole versus Johnny Gargano for the NXT Men’s Championship in a Two Out Of Three Falls Match (One Fall is a Street Fight, One Fall is a Standard Match, and the Third Fall is selected by William Regal)

This is definitely going three falls. That’s pretty much a no-brainer. I expect to see Cole and his Undisputed Era cronies win the street fight and the regular match will go to “Mr. Wrestling” Gargano. And the third fall? This is where is gets iffy. I, like most others, would love to see Gargano win the title back and be the NXT Champion once more, but let’s be serious here. It’s really too soon for Cole to lose the belt and Gargano doesn’t need it. He’s over like chocolate with a fat woman already and is ready to go to the main roster. Cole will take a beating, but when that final bell rings, from the final match, Adam Cole will still be standing tall as the NXT Champion.

Mia Yim is one bad ass lady and really, really good. But is it time yet for Baszler to give up that Woman’s Championship and move on to the next level? She’s ready to be sure and would be a welcome face on the main roster, but she’s doing such a good job as the champ and I don’t want to see her lose it just yet. I don’t think she will. I’ll look for Mia to take Shayna to the limit, but when the smoke clears, there will be no title change and we move on to bigger and better as these two women continue to feud and battle.

If a title is going to change hands, I think this would be the obvious one. The Street Profits are already on RAW every week and it’s only that they’re the current NXT Tag Team Champions that keeps them from being active in that ring and having matches. So what’s the solution? Have the Profits drop the titles to the Undisputed Era and thus, they’re free to move to the main roster and challenge the OC or the New Day, plus we see to see a magic moment of all Era holding NXT gold at the same time. Sounds like a plan to me.

This should be one amazing and fun match and I’ll go ahead and get straight to the point. I want to see the Undisputed Era pulling a “Four Horsemen” and holding all the gold at the same time. The only way this is possible is if Cole retains, Fish and O’Reilly win the tag titles and Roderick Strong manages to pull off a victory in this match. I think he can do it so let’s call it now.

Io is in the start of a fantastic heel run and she’s not going to lose just yet. LeRae will give one heck of a fight and I expect to see her dominate most of the match, but the emotions will take over and the disrty and dastardly Shirai will steal a victory from the jaws of defeat. Watch and see.

And there you go. My predictions for NXT Takeover: Toronto. Thanks for reading. I’ll have my SummerSlam predictions up tomorrow night most likely so watch for them. Thoughts and comments are welcome and appreciated. Until the next time, take care and enjoy the matches. I’ll catch you on the flip side. 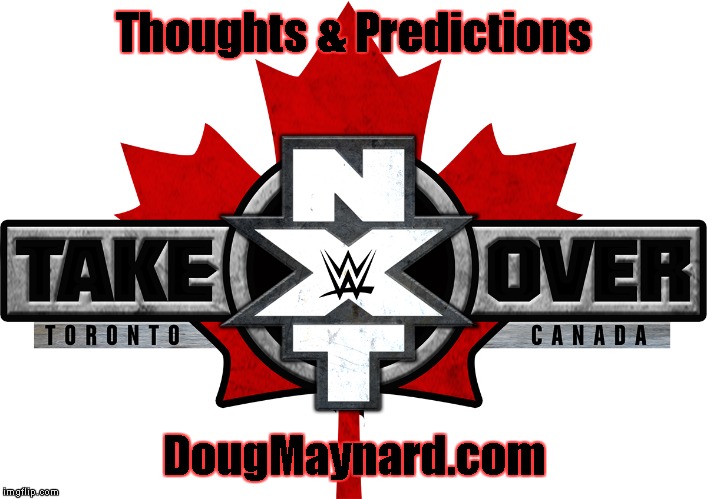