My new homie, D-Rock sent me a few questions last night and so, here you go. Time for another “Ultimate Wrestling Q&A”. So are you ready? Let’s do this…

What was the most overrated match ever?

Any match involving Bret Hart and Shawn Michaels opposing each other and at war. I can’t help it. Bret has always bored me and HBK, he is a great wrestler, but he was also a major prick and while that shouldn’t affect my pick, it does. Also, Andre versus Hogan at Wrestlemania III. The match had all the hype and was the reason that Mania was such a success, but to be honest, the match itself sucked ass. Andre was in bad shape, slow and hurting and Hogan, well he was Hogan. The hype was great. The match, not so much.

Were you a fan of Rocky King?

Rocky King was and is a talented guy and he was a strong performer back in the day that was just on the edge of being a star, but couldn’t break that glass ceiling, most likely due to his race and the facts that a black man getting over in the south in the late 70’s and early 80’s was next to impossible. But he did it and had a good run and remains in the people’s memories and thoughts even today while others like Ron Ritchie, Tony Russo, Steve Muslim and Keith Larson are largely forgotten. A good wrestler and from all accounts, a good guy too.

Would the Hulkster have made a great Horseman?

Nope. The Horsemen were wrestlers first and ego second and worked as a unit to protect Flair and dominate the NWA. Hogan was all about Hogan, period. Maybe before he was “Hulk Hogan”, as either Sterling Golden or the heel Hogan from the WWF that was managed by Freddie Blassie, he had Horseman potential, but once he did that face turn in the AWA and did the Rocky movie, there is no way Hogan and his ego would be comfortable as a part of a unit and not as the main focus of attention.

A great body when he was younger and some charisma, but not the brightest bulb in the lamp if you catch my drift. He had a good run in Crockett and then with the WWF, but wasn’t as important as he seems to think he was and proof that a true superstar needs more than just muscles to survive.

Name three wrestlers you wanted to see in a tag match, but it never happened?

Name two wrestlers you always wanted to see as a tag team, but it never happened?

Rumors are out that Kevin Owens will be moving to NXT. Thoughts?

A former NXT Champion and WWE Universal Champion that draws fans, gets media attention and is pretty much wasted on the main roster taking a step back and helping to be the face of NXT when they go live on the USA Network in a couple of weeks. Works for me and the WWE would be hard pressed to find a better person for this role.

And there you go. My thanks to D-Rock for the questions and I hope that I’ve answered them to your satisfaction. Any comments, thoughts or questions to ask, just drop me a line and I’ll get to them as soon as possible. And now, I’m gone. Until the next time, take care and have a great one. I’ll see you at the matches. 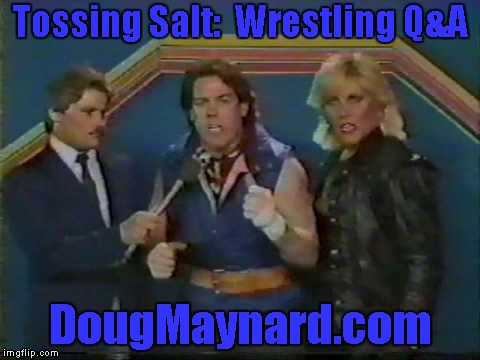