Update:  I posted this and then heard the news. The first ever Women’s Match for Crown Jewel has been added to the event.  It’s Natayla versus Lacey Evans making history for WWE and women everywhere.  So let’s do a quick prediction for that match and then on with the rest of the column.

These women have been partners and have been opponents and have a great chemistry together.  This should be a relatively short match, but hard hitting and fun as well.  Lacey is good, but Natayla and her sharpshooter will end up getting the win.

And now, the rest of the story….

Coming up tomorrow afternoon, Thursday October 31, 2019, live on the WWE Network from Riyadh, Saudi Arabia, is WWE Crown Jewel. It’s a big time show with some big time matches and of course, that means some big time predictions. Have no doubt. History will be made at this epic event. So let’s can the chit chat and do the paddy wack and toss the dog a bone. Who will win? Who will lose? Here’s what I’m thinking. And away we go…

Cain is the man who beat Brock back in UFC to capture the UFC Championship and even managed to give Brock some permanent scars in the process. This has to be a weird feeling and match for both men and I wonder how much will be professional wrestling and how much will end up being a shoot? Velasquez has, from what I understand, signed a contract with WWE and will be sticking around for a while so the possibility of him actually winning and becoming the WWE Champion is very strong. But no one wins a World title in their first match with the company… except for Hogan… and Christian. Even Ronda Rousey worked a few matches first before becoming a champion. This should be brutal and a fun match to watch. I don’t think that Brock will get a clean win over Cain. That would cut the legs out from any future stories and matches. I don’t think Cain will win the WWE title. That would be, in my opinion, a slap in the face to every former World Champion. He’s a strong UFC star, but he has to work his way to the top. Look for a DQ finish and this match will continue on at later dates. I’ll say Heyman gets involved, Brock uses a chair and the ref calls for the bell.

Will they be bosing? Will it be a straight up wrestling match? It doesn’t matter. Fury is here for one match and he’s not going to give up that title of “undefeated” for one match again Braun. Strowman can lose and it won’t hurt him all that much, no more than being Brock’s bitch last year did. He can rebound and be rebuilt. Fury with a KO for the win.

It’s falls count anywhere and the match can not be stopped for any reason. So what does WWE do? They’ve painted themselves into a corner here because if Seth wins, that pretty much destroys the Fiend character and reveals weakness that shouldn’t be there. But if Bray wins, both world titles are on Smackdown and the Fox people have made it clear that they want Wyatt and Brock both on the Fox show. I’ll go with someone else getting involved, maybe one or two of Bray’s previous victims, and the numbers are too much even for the lunatic power that is Bray. So Seth squeaks out a win and Bray moves his attention to someone else for costing him his opportunity to become Universal Champion. Not sure how it happens exactly, but Seth wins and stays champion.

Did you hear about Hogan’s plane problems in Iceland. He, Jimmy Hart and their mystery passenger (Ric Flair) had engine problems, the tires imploding and all sorts of issues. Luckily, they managed to catch a ride with Brock Lesnar and made it to Saudi Arabia so the match can go on. So many great names and yet for this match, I feel no anticipation or excitement. It’s just a cluster-f*ck match thrown together to give everyone something to do and collect an easy paycheck. Flair has the stronger team by far, but Hogan is there and he has Ali and Roman and Ricochet and even the little guy all on his team and the faces have to win here. Is this elimination or one fall? Doesn’t matter. Whatcha gonna do, brutha, when Team Hogan runs wild on you?

This is the kick-off show and will probably be my favorite match of the night. Who will overcome the odds and give AJ Styles a match for the ages (and the U.S. title)? The Singh brothers are in the Battle Royal and so are R-Truth and Drake Maverick so I expect we’ll see some 24/7 craziness during this match and maybe even see R-Truth get “his baby back”. I hope so. I’d also like to see Heath Slater walk out with the 24/7 title. After all, he has kids. But all of that aside, who gets to fight AJ for the United States title later in the evening? It won’t be Mojo, Nese, Crews, Kendrick, Young, Harper, Slater, Jose, Maverick, The Singhs, Shelton, Sin Cara, Tozawa or Truth. I can see arguments being made for Titus, Alexander, Carrillo, Murphy and Rowan. I think it comes down at the end with Buddy Murphy and Humberto Carrillo. Since they had a match on Monday (a warm-up match?) and seem to be headed towards a feud, I’ll go with Humberto Carrillo to take the win here.

Winner and challenger for the US title: Humberto Carrillo

Another good match like we had on Monday and it ends with the same results. AJ pins Carrillo and retains his title.

Namsoor is the hometown boy and local favorite. That’s all we have to know about this match. Cesaro makes him look like a billion bucks and at the end, does the J-O-B.

The Best in the World, tag team style. Let’s go ahead and eliminate who will NOT be winning. It won’t be the New Day, Heavy Machinery, Lucha House Party, Ryder & Hawkins or the B-Team. I ewould personally love to see Dallas and Axel win it all and shock the world, but that won’t be happening. The tag champions for both brands are in this with the Viking Raiders and The Revival. Dolph and Roode are out of it because they lost their belts and it wouldn’t make sense to have them win. The OC have lost as many matches as they’ve won so that doesn’t really make sense to have them win either. It’ll come down at the end to the two sets of champs and I think that the best choice and winners should and will be The Revival. They are arguably the best tag team wrestling today and even Jim Cornette likes them. They should win this match and the Best In The World tag and trophy.

And there you go. So will you be watching Crown Jewel? Who do you think will walk out with their arms raised and who will hang their head in sorrow. Let me know with your comments and thoughts, either in the comment box or at my e-mail at Doug28352@yahoo.com. Any questions, ask them too. My thanks for reading. And with that, I’m out of here. Until the next time, be safe and always be just too sweet. I’ll see you at the matches. 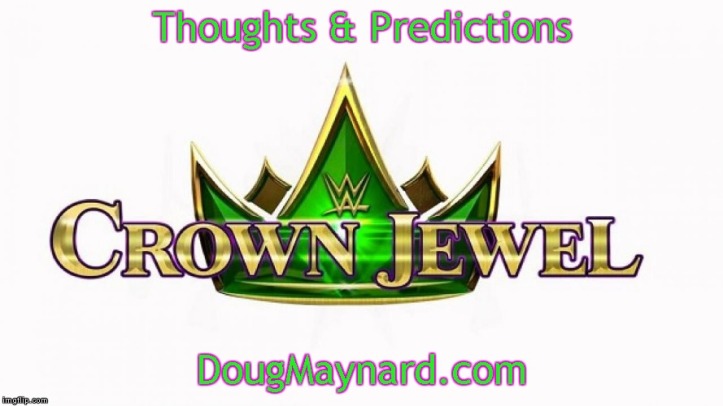