Welcome to the Wasteland! Actually, this is just a new edition of the ever so glorious Wrestling Fact or Fiction column, but I feel pretty wasted right now and that description just feels right. And a shout out to the former NXT Tag Team Champions, The Ascension, there is that as well. So how are you doing today?

Wrestling Fact or Fiction is where we take several statements and either I agree with them or I don’t and then explain why. It’s a signature piece from the site 411mania.com and credit goes to Jake Chambers for the statements. The opinions that follow each one though, that’s all me. Why am I awake this early on a Sunday morning? I have no idea. Let’s do this…

FICTION: Predictable? To a point, I’d have to agree with that. No one was expecting to see Moxley join Jericho and the Inner Circle. But he did and as the celebration went on (and on and on), it seemed as if Moxley truly did go over to the dark side, but then, when all seemed lost, Moxley said, “Nope” and turned on Jericho. Not original, but well-executed and entertaining. And thus, not lame at all.

Statement #2: If you could see Shawn Michaels in his prime versus one wrestler today, in a PPV main event, it would be Seth Rollins.

FICTION: I’m not a big Rollins fan and would much rather see HBK against the man he helped train, Daniel Bryan. Or Kevin Owens. Or Cesaro. Or Buddy Murphy. Or CM Punk. Or just about anyone else not named Seth Rollins.

Statement #3: Tessa Blanchard is currently the best female professional wrestler on the planet.

FICTION: Tessa is amazing and talented, but the best? So long as Charlotte Flair, Asuka and even though she’s technically retired, Victoria, are still alive and breathing, Tessa is only one of many and not the absolute best.

Statement #4: Andre the Giant really did beat Hulk Hogan at Wrestlemania III following the failed bodyslam attempt in the opening minutes of the match.
Special Task: Please write your response in pro-wrestling kayfabe

FACT: It was so obvious to everyone watching that Andre had Hogan pinned! And that crooked referee, the idiot with the brain the size of a dehydrated pea, was paid off by Hogan and the promoters and was told not to let Andre win. But Andre, being the biggest and best Giant of all time, did win and the referee, the Promoter Vince McMahon, the goofs that run the WWF all conspired and plotted and screwed Andre out of that WWF Championship which should be his right now. The Giant IS the WWF Champion. He beat Hogan and only that referee with his head up Hogan’s butt and protecting him kept Andre from getting the belt. But mark my words, for those who know and matter, Andre the Giant is the rightful WWF Champion. And that is the truth, period!

FICTION: #DIY, The Revival and The Undisputed Era are absolute belonging here, but American Alpha? I think I’d replace them with either The Ascension or how about a little love for Enzo & Big Cass? Either of those teams would be better suited for the fourth spot in my opinion.

Statement #6: Your opinion of a wrestler can change based on the quality of their merchandise.

FICTION: My favorites in the WWE include The B-Team, Zack Ryder and Heath Slater, none of who have a wide assortment of merchandise available. I like wrestlers for their abilities, their personalities, their characters and what kind of matches they can perform. Basing an opinion on a t-shirt or action figure rather than the abilities and characters and entertainment skills is a pretty lame-ass way to decide to support and cheer a wrestler or not.

And that brings us to the end. My thanks for reading. Any comments, thoughts or questions are welcome and appreciated. Until the next time, take care of yourself and don’t forget to support your local Independent Wrestling companies. I’ll see you at the matches. Take care. 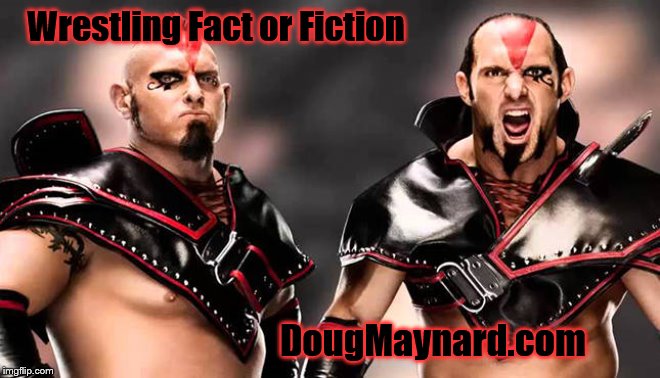