It’s a lovely Sunday afternoon and I bid you welcome to another edition of the Ultimate Wrestling Q&A. We are just a few hours away from WWE Elimination Chamber as I write this and I have to tell you, I’m not all that excited. It just seems like a show thrown together to be filler for the WWE Network as we continue to inch closer and closer to Wrestlemania. I’m sure it will be a good show and everyone involved will work hard and bust their asses to have great matches, but my interest at this point is not all that. Maybe it’ll pick up in the next couple of hours. We’ll see.

As for now, we have questions about the world’s greatest sport from one of the world’s greatest readers, the always incredible Dan M. Dan doesn’t often send me questions for the columns, but we talk frequently about our mutual love of good wrestling and classic Crockett Promotions on Instant Messanger. My thanks and by the way, Steamboat DID turn on Paul Jones. And now, let’s get busy and see if I can answer a few of Dan’s queries.

Should Randy Orton versus Edge be the match to close Wrestlemania?

Part of me says yes and yet part of me feels that the final match of the night should be a World Championship match. Edge hasn’t wrestled a full singles match in almost 9 years and I don’t know how smart it would be to have him in the main event to close the show at Wrestlemania. But then again, it’s Edge and Orton and who deserves that spot more? It’s a mixed call and there are pros and cons to both choices, having Edge & Orton as the main event and having them earlier in the show. If I had to make the final call, I’d say no and have them as the opening match of Mania instead to set the bar for the rest of the show.

Who do you think will be revealed as the “Exalted One”?

All the clues say Matt Hardy although Brodie Lee and Lance Archer have both been hinted at as well to be revealed as the dreaded “Exalted One”. Hell, it could even be Jake Roberts since he’s now a part of AEW and it fits his character. But with all of that in mind, I’ll go with none of the above. I always love a swerve and while everyone is looking at all of these potential arrivals to AEW, I think it will be someone who is already there but has been overlooked. Shawn Spears perhaps? Maybe Joey Janela? Don’t forget Tully Blanchard is still under contract and so is Diamond Dallas Page. My pick will be a man who’s not a part of AEW, but recently finished up with Impact Wrestling and who’s character certainly fits the bill. How about James Mitchell, aka the Sinister Minister? And now you know. You’re welcome.

Who will be the first wrestler to go from AEW to WWE?

Joey Janela has already left AEW to go back to the Indy scene full time so he would be a likely option and I think WWE would do well to give this man a call. But so far as AEW Originals that I feel WWE would (and should) try to steal away if they become available or their contracts lapse. One name comes to mind and he would be a major player in WWE. Maxwell Jacob Friedman, aka MJF.

Should the upcoming AJ Styles versus Undertaker match at Mania be changed to a six-man tag with the O.C. taking on Undertaker, Kane and a third partner?

While I’m sure that AJ Styles will easily be able to handle his share of the load in the rumored AJ versus Undertaker match at Wrestlemania, I can’t say that I feel all that confident about The Undertaker and his abilities. Since we know that Gallows and Anderson, the OC, will be getting involved at some point, why not add a few other names to the mix, make it a six-man tag and thus give Taker a little protection in the ring for this match. Kane is his “brother” and would be a natural choice and it would allow WWE a chance to add another legend to the mix. It’d probably be a far better match with several guys who can go rather than having to depend upon AJ to do the bulk of the work. I’d love to see WWE take this angle in this direction.

And if so, who would you pick to be the third man on the Kane & Undertaker team?

There are a few guys on the WWE roster who could step up like Big Show, Booker T, Mark Henry or even Aleister Black. Black as a partner to the Brothers of Destruction would be awesome and make sense given recent story-lines. He would be my second choice. My first choice would be another legend offering to lend a hand. Imagine this match. AJ Styles, Luke Gallows and Karl Anderson versus The Undertaker, Kane and the man they call Sting. You want to see it too, don’t you? So if he’s willing and available, Sting and if not, then Mr. Black.

After this year’s Hall of Fame, X-Pac will be a two-time Hall of Famer for his roles in both the nWo and DX. Is he worthy?

Look at the other men who hold two Hall of Fame rings. Ric Flair, Booker T, Hulk Hogan, Scott Hall, Kevin Nash. And then Sean Waltman, aka X-Pac. Does that sound right to you? X-Pac was a prominent member of both factions so I’m glad he’s getting some recognition and credit but does he really deserve to be a two-time Hall of Famer? I think this falls under who you know and being in the right place at the right time more than actual in-ring accomplishments, but whatever. It is what it is and congrats to Waltman for the honor. Now, what about The Midnight Express and Cornette? When are they going to get their due?

And there you go. My thanks for reading. Any comments, thoughts, or questions, just give me a shout either here at the site or at Doug28352@yahoo.com. Follow me on Twitter at @Doug28352. Until the next time, take care and stay safe. Don’t forget Elimination Chamber tonight on the WWE Network. Have a great one and I’ll see you at the matches. 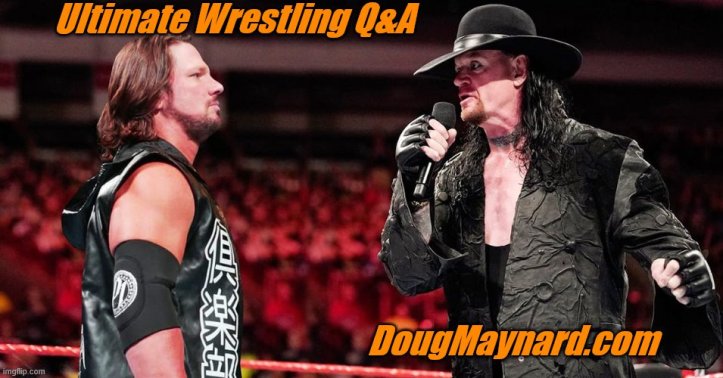