Coming up tomorrow night, live on the WWE Network, is the 2020 edition of WWE Money In The Bank. It’s a big night for WWE. Let’s break out the crystal ball and make some predictions.

The first-ever Corporate Money in the Bank at WWE HQ with both matches happening simultaneously:

Daniel Bryan vs. Aleister Black vs. Rey Mysterio vs. Baron Corbin vs. Otis vs. AJ Styles.

This one should be different since it’s pre-taped, at the WWE headquarters in Stamford, CT, and has both matches taking place at the same time with the men and women. Anything can and probably will happen. Let’s eliminate a few people to start our selection process. Rey Mysterio will not win. Neither will Baron Corbin and I think that Otis is a long-shot at best. So that leaves Bryan, Black, and AJ Styles. I think that since AJ threatened to throw someone off the roof and is now unkillable after being literally buried by Undertaker in the Boneyard Match, he’ll be thrown off the roof and die, only to return to RAW Monday night. And that leaves Daniel Bryan & Aleister Black. Bryan has been making noise about going part-time so he’s out. Process of elimination, Aleister Black takes the win, climbs the ladder and becomes Mr. Money In The Bank.

Winner and new Mr. Money In The Bank: Aleister Black

Asuka vs. Shayna Baszler vs. Nia Jax vs. Dana Brooke vs. Lacey Evans vs. Carmella.

This one comes down to three women. It’s Asuka, Baszler or Nia. Carmella has already won a Money In The Bank match, twice, and Dana isn’t getting any kind of push now (or ever) so she’s out as well. Lacey, if she was still a heel, would be a contender, but as a face, she’s losing steam and I can’t see it happening. Nia? She’s a strong possibility, but I hope not. It would make things seem as is she’s being rewarded for being stiff and hurting people. She already has a history with Becky anyways so a briefcase or contract is not needed to keep that feud alive. I want Asuka to win. I need Asuka to win. It should be Asuka that wins. But Baszler needs it more and it makes the most sense to keep things going after their match at Mania kind of stalled. I want it to be The Empress, but my gut says the Cage Fighter.

Winner and Miss Money In The Bank: Shayna Baszler

It’s way too soon to switch the belt here. Drew is just getting started with his run as the WWE Champion and Seth has already been there so many times. I wouldn’t be surprised to see Murphy get involved to help out his Messiah, but the results at the end should be obvious for everyone to see. Claymore and then the pin 1-2-3. Drew retains.

Tamina as the Women’s Champion? I just don’t see it happening. How did she even become the top challenger? Did Vince just pass her in the hall one day and ask, “Who is that? She still works here?” and then decide as a rib to put her in the main event? Tamina is big and better than Nia, but beating Bayley? Representing Smackdown as a Champion? What the hell. It’s the female version of putting the belt on Khali or Jinder. I think WWE will do it and we’ll see a quick title change. And then Sasha can beat her for the belt and Bayley and Sasha can switch roles in their current teasing of a possible feud between the two best friends. We need something to shake things up.

This match should have me trembling with anticipation and excitement. It doesn’t. Braun should never have been made champion, but in the same argument, Bray should never have lost to Goldberg. So let’s rectify things now. Bray beats Braun and gets his title back and then we forget that the past few months ever happened. No Goldberg. No Braun. Just Bray and his Universal Championship. Works for me.

The New Day should drop the belts and be done as Champions for the time being. They’re stale and old-hat. Lucha House Party will NOT be winning the belts here. They’re not over and annoying as heck. So do we go with Morrison & Miz or the newly arrived to the main roster Forgotten Sons? Miz & Morrison don’t need the belts. They’re over like Rover already and are more fun when they’re complaining about being screwed and challenging for titles than actually being champion. So the Sons win and we get some new blood on top of the Smackdown tag team division.

And there you go. So are you planning to watch? Who do you think will win or lose at the big show? Let me know in the comments. Any thoughts, questions, or comments to share, give me a shout here at the site or at my e-mail of Doug28352@yahoo.com. Follow me on Twitter at @Doug28352. And don’t forget to support your local Indy wrestling companies and wrestlers. Until the next time, stay safe & be awesome. I’ll catch you on the flip side. 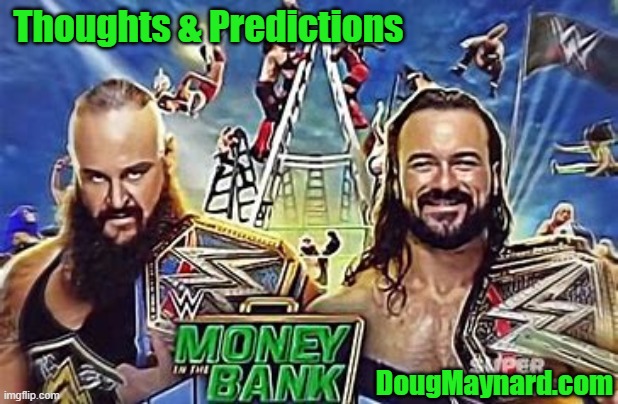