It’s Sunday morning and you know what that means? Another edition of the most must-read Q&A column about pro wrestling ever. It’s the Ultimate Wrestling Q&A and I’m Doug and dat is all de people need to know. Let’s do this…

Happy Birthday to my older sister, Lynn Stokes, my lil’ sister, Lee Ann Manship, and my Aunt, Ida Johnson. Love all of you. Enjoy your day!

What do you think about Brian Cage being given the FTW belt by Taz?

With the AEW title match against Moxley being pushed back due to Mox’s exposure to COVID-19, it’s a good move to give Cage some more credibility and the spotlight while he waits. It’s a great endorsement by Taz and a way to AEW another championship title without having to do all the necessary things to create a new title. I approve and am glad to see the FTW belt back and Cage is a good choice and should represent the title very well.

If Sting comes to AEW Which Sting Era Should He bring with him?

My personal favorite was the Joker Sting from TNA, but I think he should just be who he is, the older, more mature making one final run, Sting. Or just say to heck with AEW, keep collecting those WWE “Legend” checks, and pushing for a cinematic match with Undertaker.

Who is the greatest performer of all time?

Some wrestlers are great in the ring, but can’t talk. Some are excellent promo guys, but their matches aren’t all that good. The greatest of all time is someone who can do it all well and put it together for the total package (and I don’t mean Lex Luger). Several names come to mind like Jericho, Bret, Piper, Ole, Arn, etc, but the one who stands heads and tails above them all has to be “The Nature Boy” Ric Flair. Diamonds are forever and so is Naitch. Woooooooo!

Who is the worst worker in pro wrestling today?

A hard call since most wrestlers have some good moves or qualities about them, but the two that stand out for me are Tamina Snuka and Nia Jax, neither of who would have a job if not for who their family is.

Don “The Rock” Muraco was an extremely talented performer who had that air of tough guy about him. He wasn’t great at any particular thing, but he was good at everything and just a solid and strong talent that any company would be happy to have. He gave Bob Backlund some good matches in the 80’s and his feud with Roddy Piper in Georgia was something worth noting as well. He was able to turn Piper face and that was a great accomplishment considering just how despised Piper was in those days. Just a good, strong worker and great heel.

If you can bring any wrestler from the old school to wrestle in today’s wrestling who would it be?

Rumors are that there will be a second Evolution pay-per-view coming up this fall in WWE. Thoughts?

I hope so because the first one was excellent and the ladies of WWE deserve another show to call their own. Right now, it’s mostly the women of WWE who consistently have the best matches and stories and yet, when it comes to shows like the Saudi events, they’re ignored and forgotten about and still even now, are often found playing second fiddle to the men wrestlers. They deserve their time in the spotlight and I hope that this happens.

And there you go. My thanks for reading. Any comments, thoughts, or quesitons you’d like to see answered, just drop me a line and let’s chat. Have a great one and don’t forget to support your local Indy wrestling and wrestlers. Take care and I’ll see you at the matches. 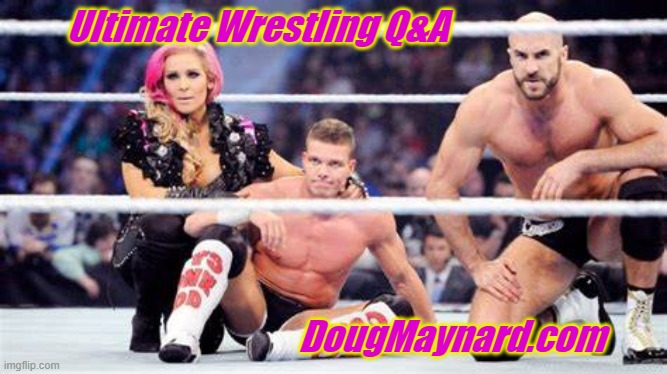