Welcome to the Ultimate Wrestling Q&A. It’s time to attempt to get ahead of the game for a change. These questions are from The Cheese and Jesse, via the e-mail. And the answers, those are from me. Are you ready? Let’s do this…

AEW seems to be good about bringing in older wrestlers and legends from the past when necessary to help build story-lines and characters. What legends would you like to see show up on AEW and make an appearance?

Exotic Adrian Street & Miss Linda would be fun to see to give some words of inspiration to Sonny Kiss. I’d like to see Best Friends have an encounter with another set of “best friends”, Lenny Lane & Lodi. Imagine the pop that Ivory & Molly Holly would get walking into the arena. Just imagine Darby Allin walking into a room and Abdullah the Butcher is just sitting there, that would be great. And those are the first names and concepts that they come to mind.

Where would you rank Lita among the all-time greats of Women’s wrestling?

Lita is a good talent and decent in that ring, but I think she’s a better character than an actual in-ring performer. She doesn’t do much and would be in way over her head with most of today’s talented female performers. She can put on a good show, but she’s not in my Top Ten.

How/why is Rick Martel not in the WWE HOF?

Why is a good question, but I’m sure it’s just a matter of when and not if. Martel is a former AWA World Champion and Intercontinental Champion and so far as I know, on good terms with the company. He’ll be in the Hall of Fame eventually. I think it’s just simple oversight more than anything else.

Who was the best jobber of all time?

Joey Maggs, Rick McGraw, Brad Armstrong (not a jobber in my opinion, but was treated as one far too often), Ron Ritchie and Barry Horowitz are the names that come to mind.

If the Inner Circle was to get a new member, who would you pick?

To be honest, the charm and allure that is the Inner Circle have faded a bit since their illustrious debut. Jericho is still hot and despite his suspension, Sammy has managed to keep his heat, but Jake Hager and the team of Ortiz & Santana seem like lost causes at this point. I’d keep Jake, mainly because I’m still a fan of the man from his “We The People” days in WWE. But I’d dump Ortiz & Santana and replace them with Matt Cardona & Wardlow.

Hangman Page was kicked out of the Elite. Thoughts?

Page was eliminated by the Elite after getting involved in a match involving the Young Bucks. Now, we’ll see him and Omega defend their tag team titles against FTR at the All Out PPV and we’ll see Omega pull a Horseman swerve, aka Barry Windham on Lex Lugar style, and layout Omega to give FTR the title belts. Then Page and the FTR team up and is this the base for a new team of Horsemen? Watch and see.

Why is everyone so obsessed with the idea of a “new” Four Horsemen?

Because The Horsemen were a great faction that represents a better time for professional wrestling and having two of the original founding members, Arn Anderson and Tully Blanchard, both as part of AEW make people nostalgic. And the threads all seem to be coming together to a formation of FTR and Shawn Spears, managed by Tully and possibly Adam Page as a new Horseman like faction. This faction will happen, but it’s not The Horsemen. WWE owns the rights to the Horsemen name, but this will be a junior league version, AEW style. Why? Because they can.

Would you listen to a podcast with CM Punk and Renee Young?

Absolutely. I don’t think it will ever happen, but if it was to happen, I’ll be one of the first to subscribe and listen.

And there you go. My thanks for reading. Any comments, thoughts, or questions to ask, just drop me a line and let’s chat. Until the next time, take care of yourself and watch out for the crazies. I’ll see you at the matches. Take care. 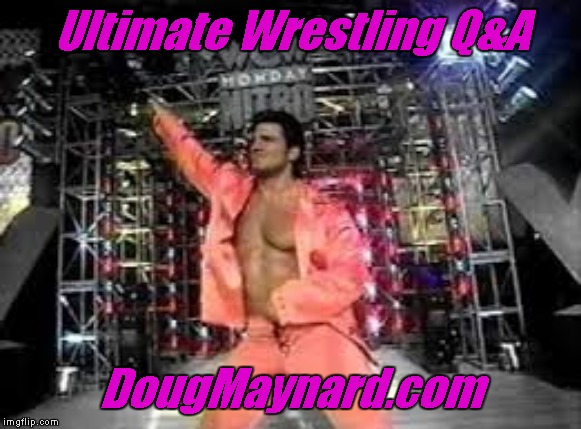