Are you ready to get all political? One of my favorite sites on Facebook is one called “Opposing Views”, where they claim to have no agenda, but love to trash the Trump and push the left-wing issues and policies. Yeah, I said it. Regardless of their claim, everyone has an agenda when it comes to politics. And yeah, I guess that includes me as well. I’m just wanting to call it like it is, be straight up and let’s make America, the greatest country in the world, great again. Remember the Charlie Daniels Band song, “In America”? ‘Nuff said! But regardless of my issues with the motivations of the “Opposing Views” website, they do have some great questions that they regularly ask their readers. I’ve taken a few of those questions, the first ones I came across on their site, and I’m going to give my thoughts, my opinions and my answers. Yes, I’m giving my “opposing views”. It’s the truth with a Dougie twist. Let’s do this…

Which First Lady do you prefer seeing in the White House: Melania Trump or Michelle Obama?

I definitely prefer Melania Trump. She’s a beautiful and intelligent woman. Michelle was about as useful to me as her husband, but much more manly of course.

Do you think Trump is purposefully dividing America for his own political benefit?

I think Trump is fighting back against the people who are determined to oppose him and attacking him because they can’t get over that their candidate lost and are now afraid that their entitled asses will lose all the free stuff that the previous administration had given them. Donald is a loud-mouthed and arrogant blowhard and has the sensitivity of a lump of coal, but I think he has the best of intentions in mind and truly wants to make our nation great again. And somtimes, that involves people having to face reality and come out of their dream worlds and face hard truths, that the world doesn’t revolve around them and life isn’t always fair. Some may call it creating division, but I see it as do what has been needed to be done for far too long and it’s clearing the rubble to make room for the finished product, a better and great country.

Yes or No: Do you think Trump is racist?

Nope and I’ll tell you why. There was never, ever a single claim about Trump being racist until he decided to run for President. For years and years, whenever the urban community in New York needed money, they asked and Trump supplied. When Al Sharpton and Jesse Jackson had an event, the first in line was Donald Trump. Trump has been involved in helping the minority communities in New York since the early 70’s. I’m not saying that there aren’t bumps in the road here and there, like a couple of government lawsuits and what not, but that was against companies owned by Trump and not the man himself. Yes, there is a difference. Has anyone at all ever come up with a report of Trump calling blacks the “N” word or calling latinos “Spics” or anything even similar? He does call Elizabeth Warren “Pocohantes”, but that’s because she lied about her supposed Indian background to get benefits and it’s called “sarcasm”, something Trump is very good at. Trump doesn’t see or care about skin color. He see’s people and what they represent, how they act, how they deal with things and most importantly, what can they do for him and his situation at any given time. He’s a business man first and foremost and it’s not about being black, white, yellow or whatever… it’s all about the green. Bottom line. Trump isn’t racist in my opinion. It has nothing to do with the color of your skin. It’s all about the character of your soul.

Do you think Obamas are good role models for American kids?

In some ways, yes. I don’t like their politics and question their honesty and characters, but they’re still proof that if one is determined enough, focused enough and sticks to your guns… oops, I can’t say guns because that would offend people so change that to “stay motivated”, that anything is possible. Obama went from dealing drugs (allegedly) in college to becoming President of the United States, mainly because he was photogenic and gave a great speech. That is a story worth reading and could be an example for kids that anything is possible in America.

Paul Ryan says Trump’s response to the Charlottesville tragedy was simply awful. Who do you side with: Ryan or the president?

Ryan is wrong here and let me tell you why. Trump’s initial response wasn’t great, but he did and said nothing wrong. If any other President in history had said the exact same thing, no one would have said a single word of complaint. But it was Donald Trump talking and no matter what he says or doesn’t say, it was ripped apart and dissected by the media and automatically wrong. Perhaps Trump could have been softer and more consoling during the initial comments, but that’s not Trump. He stated the truth and got trashed for it. Ryan needs to worry about his own comments and image and be less concerned with that of the President.

Sarah Palin says Republican politicians who refuse to support Trump should be kicked out of the party. Do you agree with her?

No because that would leave a very small and tiny party left over. Palin is a bit out there sometimes anyhow, but should know better. The Republican Party is many things to many people. Some things are good and others, not quite as good and it’s in a state of constant evolution, constantly changing. It has to be about people with different opinions and ideas all coming together. We have to be about real values and change and thinking outside the box, a melting pot of ideas and compromise. We can’t all just follow one person blindly and have just one goal and / or agenda or else we’d be the Democrats, the party of Hillary and Barack and that would never do. The Republican has to include everyone, with their different opinions, different values, different ideas, all united towards a single goal, making America great again. And part of that includes standing up to the President and when he’s wrong or screwing up, telling him so. Palin is so very wrong here.

Are you glad Obama will never be president again?

Newt Gingrich says Trump has his issues, but he’s still a way better president than Hillary would have been. Agree or disagree?

I definitely agree. Trump was not my first pick or even my tenth pick, but he’s the President now and I have to respect that and live with it. So far as better than Hillary goes, that’s not hard to do. A pile of dog feces would be more honest and trustworthy than Hillary Clinton. Bernie Sanders is a total hypocrite and nut-case, but he would be better than Hillary. Bill Cosby would make a better President than Hillary (just don’t eat the jello pudding pops). Trump is a bit crazy and marches to his own, very erratic beat, but he has an agenda and truly does, I believe, want to put America first and as he says repeatedly, “Make America great again!”. Hillary is the embodiment of Satan himself, but I think she may be more truly evil than even the fabled fallen angel is professed to be. By comparison, Hillary makes Wal-Mart look like a shining and noble place in our lives. She is that bad.

Yes or No: Do you think the media hates Trump?

Is this even a real question? I don’t think it. I know it. And if you want proof, compare the attacks by the supposedly impartial media against this President compared to the reporting on any other former President. The only difference is that Trump lives for the fight and is fighting back hard. It’s a war he can’t win, but he won’t stop. And neither will the so-called journalist. Forget about actual news and what actually happens. It’s far better to imply, suggest, make up stuff and speculate as to further their agenda and bring Trump down.

Who is more corrupt: Trump or Hillary?

Trump is crude, rude, overbearing, loud, speaks before he thinks and too damn cocky for his own good. Hillary is a Clinton. I think the answer is obvious.

And I think that’s it for now. I’ll be back later on tonight with more stuff. Thank you for reading. Thoughts, comments and opinion is welcome and appreciated. Tell me what you think. And we’ll keep it real. Until the next time, have a great one. 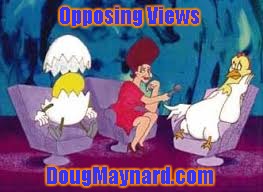