Coming up on Sunday night is the latest pay-per-view offering from Anthem and Impact Wrestling. It’s Redemption and it’s coming live from Orlando, Florida and the Impact Zone at Universal Studios. While I’m not a big fan of Impact Wrestling and don’t follow it nearly as well as I do the WWE, but in the interest of fairness and since I’m planning, as of now, to watch Redemption on Sunday night, I figured a shot at PPV thoughts and predictions might be fun to do. So I’m going to give it a shot and see what we can do here. I know of most of the participants in Sunday’s matches and have followed the story lines on the sites so I think I can do all right. Hell, I follow WWE closely and still went 0-5 for my NXT predictions and 5-9 for Wrestlemania so I sure as heck can’t do any worse here. Let’s do this…

This is one match that should be easy to call. Pentagon Jr. is a big name is Mexico and a great wrestler. Fenix is a good wrestler as well. But Austin Aries has the name recognition and thanks to his previous run with TNA as well as his time in NXT and the WWE, is a household name here in the States. The other guys will come close and the match will be off the charts, but the conclusion is pretty much not in question. Aries retains.

Honestly, I don’t know much about either of these ladies. I did go over to YouTube for a little video research and to learn more about these two and while they’re both talented wrestlers and have a good presence about them, neither really impressed me all that much and I don’t know much more now about them than I did before. So for my prediction, I think we’ll see at least one title change during the night and I’ll go with this match. Su Yung is the new champion.

Both of these men, I do know about. I’ve been a fan of Williams for several years now and Sydal, the former Evan Bourne from the WWE, is an amazing talent that can really impress and work magic in that ring. This match should be a clinic in high-flying and showing off fancy moves. This really could go either way and it wouldn’t be an upset or shocker because they are so evenly matched and alike in so many ways. I think that while Williams is a great talent and would make a good champion, Impact would be best served to keep Sydal at the helm and keep building the X-Division around him. Look for Sydal to retain.

This should be one hell of a brawl and fight. I’m probably in the minority, but I like seeing “Big Poppa Pump” Scott Steiner back in Impact again. And teamed with Drake? That is definitely a team to watch. And LAX are damn good as well. I don’t think we’ll see a title change here, but I can’t see LAX winning either. I’ll go for the ever-so-popular “No Contest” here by calling for a double disqualification. So no winners, but LAX keeps the title and we get a rematch on a future edtion of Impact Wrestling. Sounds like a plan to me.

It’s Tommy Dreamer’s “House of Hardcore” come to Impact. Look for plunder. Look for shenanigans. Look for lots of “ECW” chants. And tables, ladders and chairs, oh my. I wouldn’t even be surprised to see some color by some of or all of the participants of this Pier Six Brawl. And since it’s a “House of Hardcore” match and the original Hardcore Icon who’s name is not Cactus Jack is one of the participants, I’ll have to go with Dreamer and his team of Moose and Edwards.

I don’t care who all is in this match. DLZ, aka Zema Ion is my man and I’ve been a fan of this hottie, my future ex-husand and modern day Juvi, since Day 1. If he’s in the match, he’s my pick to win. That is all.

One guy has the same name as a family car and the other shares a name with the Russian boxer from Rocky IV who killed Apollo Creed. I have to go with the bad-ass guy with the killer’s name. I wonder if he’ll come out to the James Brown song, “Living In America”? I doubt it. But just like Ivan Drago put a major whooping on Creed, this Drago will beat up the SUV guy. Watch and see.

And there you go. Am I right or wrong? Comments, thoughts and all feedback is welcome. Are you watching Impact and their pay-per-view this Sunday night? Let me know of your predictions and thoughts about the Impact product. And with that, I’m out of here. Until the next time, take care and I check you later. 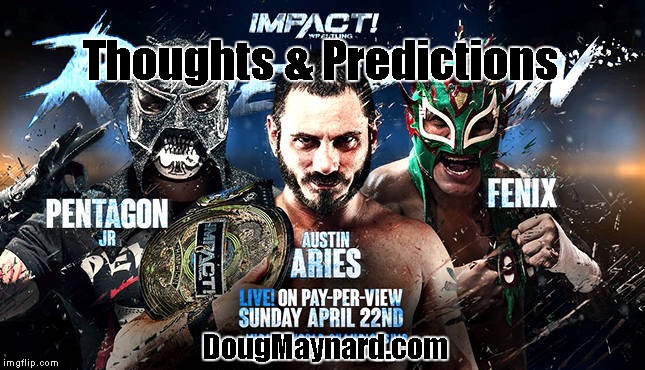