Get ready to be body-pressed, slammed and locked into the dreaded crossface chicken wing. It’s time to do that wrestling thing called “Fact or Fiction”. It’s early Sunday morning and I shouldn’t even be awake right now. Too long a night watching Season 2 of “Luke Cage” on Netflix. No wonder I can’t seem to get any work done here at the site. But so far as Cage goes, so far, so good. And so far as this goes with the wrestle-talk, I’ll do my best. The statements come from my good friends over at 411mania.com/wrestling. And as per the usual, I have all the answers. Let’s get busy and do this.

1. You were shocked that WWE released Big Cass

FACT: I had heard about the taking of liberties with the little people during the build for the Daniel Bryan feud and figured that had caused some heat backstage and he’d be punished, but I was assuming that jobbing out to Daniel Bryan would be the punishment. But I didn’t see anything that warranted getting fired. He seemed kind of stuck in low gear and wasn’t showing much improvement from his days before the injuries, but I was assuming (hoping) that they’d put Cass with a major player like Miz in a bodyguard type of role and he’d improve and get better. Alas, it’s not to be though. Drinking too much in public while on the European tour, taking out a bathroom door while on the tour bus and rubbing other talents the wrong way seem to have formed a pattern. And finally, an incident with former girlfriend and current Smackdown Women’s Champion Carmella where other wrestlers had to get involved seems to have been the final straw. I can see a lot of potential in Cass and hopefully, he’ll be able to get his act together and one day, make a comeback to the WWE rings, but I doubt it’ll be anytime soon. It’s a big waste, but I can definitely see the WWE reasoning with this and Cass has no one to blame but himself.

2. Rusev earning a shot at the WWE title at Extreme Rules is the right call.

FACT: The fans want to see it and I want to see it. Rusev, after a strong beginning, has been so misused and underappreciated by WWE management, yet has still managed to earn the respect of the fans and managed to get over. Maybe just because of the holiday. It is Rusev Day after all. Or maybe it’s because he has such a hot wife in Lana. Or maybe it’s just because he really is that damn good. Whatever the reason, Rusev deserves this opportunity and the chance to make an impact and move up the ladder a few more notches. I’m happy to see it.

FACT: Nia, try as she might, really wasn’t getting over as the RAW Women’s Champion. She’s getting better, but still has a long ways to go. And Ronda, putting the title on her this early would be a huge mistake that would get a lot of publicity for the WWE, but pretty much kill the title, much like the Universal Championship has suffered with Brock Lesnar as the title holder. So bring in Alexa, use the MITB Contract and whammo, problem solved. Alexa is arguably one of the best talkers in WWE today and she’s worked so hard to get better in that ring. And size wise, she matches up fat better with Ronda then Nia ever could. Now we can see the sneakiness of Alexa and the mind games as she tries to avoid and torment Ronda while Ronda can continue to be Miss Intensity and chase the title, aka a female Edge versus a modern day Stone Cold. It was a good call by WWE to use Alexa as they did and the right person currently holds the Raw Women’s Title as a result.

4. Despite delivering quality TV, WWE 205 Live being held off Raw & PPV is hurting the brand.

FICTION: This one is hard to answer because if they had been used properly on RAW and Smackdown, as a way to promote and build the 205 Brand instead of just being used as filler, this would be a true statement. But both shows tended to ignore the 205 Live Action and when they did give them some attention, it seemed to hurt more than help, presenting the Cruiserweights as an afterthought. 205 is better off, as is NXT, as a seperate but (supposedly) equal brand. It’s for shows like these that the WWE having their own Network is a big bonus and plus and can be the main tool for getting the 205 product to the WWE masses. Maybe when Smackdown Live goes to Fox, they can bring back the cross promotions and feature some cruiserweight action on Smackdown as part of the package, but for now, Triple H’s “205 Live” brand is better off on it’s own.

5. The WWE UK Brand will finally launch for real this time, promise.

FACT: I hope so. HHH and the WWE seem really determined to get things rolling with this expansion of the WWE Universe, even to the point of a second UK Tournament as well as announcements of Tag Team and Women’s Championships. Now is the time and the game is on and will happen. So they had said and so it shall come to pass. ‘Nuff said!

6. The only thing more shocking than WWE releasing Big Cass is the fact that Carmella outlasted both he & Enzo.

FICTION: While I’m a bit surprised at how much Carmella has improved over the past couple of years, I’m not surprised at that she’s outlasted both of her former partners and team mates. Enzo was annoying as shit and had heat from Day 1 with the backstage crowd and while that isn’t a bad thing so long as he could draw a crowd and it worked with the fans, it was doomed from almost the very start that eventually the bloom would fall off the rose and the thorns would need to be clipped. As for Cass, he wasn’t getting better and seemed to go out of his way to ruffle feathers with the taking liberties bit, the public drunkenness and then finally the backstage antics with Carmella was seen as the last straw. Carmella has, from all reports, worked hard to get along with everyone and also has stepped up her game both in the ring and on the mic. And her current character, especially with the addition of Ellsworth, is pure gold. She’s still there and that’s because she’s working for it, earned it and is busting her ass to keep that spot. Enzo and Cass didn’t do that and they’re gone as a result. And that’s just how it goes sometimes.

And there you go. I’m through here for now. Thanks for reading. Comments, thoughts and any questions welcome and appreciated. Until the next time, stay cool. It’s freakin’ hot outside. Have a great one and I’ll catch you later. 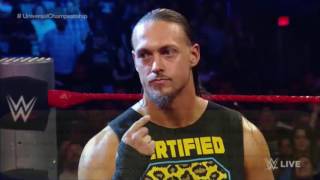