It’s Sunday morning and so this must be that Fact or Fiction thing that we do. It’s the Wrestling edition and the statements come from my long time close and personal friends at 411mania.com/wrestling. And the rest, it’s all me baby! Let’s do this…

1. You have no desire to see Shawn Michaels have a comeback match.

FACT: Let me start off by saying that I think he will be returning to the ring for at least one more match. And I think that when it happens, that match will be damn good and exciting to watch. After all, it’s HBK and he’s arguably the best wrestler not named Flair of the past twenty-five years. But he doesn’t have anything left to prove and doesn’t need to get back into that ring. I think it’s kind of cool actually that he has resisted wrestling again for so many years since retiring, being the only wrestler ever to actually stick to being retired. I don’t want to see him lose that credibility and distinction, but when he does, I’ll be one of the many of millions watching. It’s true.

2. You’re glad Mixed Match Challenge is getting a second season.

FACT: Sure, why not. It made for some interesting teams and was fun to watch. And it’s not the usual WWE fair so why not. Miz & Asuka ruled last year and I expect to see them do it again this season too.

3. Drake Maverick as the new manager of the Authors of Pain is a great idea.

FACT: THe AOP have been kind of drifting since coming to the main roster and losing Paul Ellering as their manager / spokesman so they needed someone and why not Maverick? In his previous life as “Rockstar Spud”, Maverick proved time and time again that he can really go on the mic and he’s a pretty damn good worker in that ring as well. He’s been wasted as the “GM of 205 Live”, although I do hope that he keeps that role as well, and this is a great way to not only get his career moving again, but also to jump start the careers of the AOP. It’s a good move for all involved.

4. WWE is doing a better job of hyping & building to the Super Show in Australia than the Greatest Royal Rumble event in Saudi Arabia.

FICTION: A better job? Not really. They’re hyping it pretty big and I’m looking forward to the Super Show, but the promotion for the Greatest Royal Rumble event had it looking as equal to Wrestlemania in importance and promotion. Both shows are a really big deal for the WWE and they’re promoting the hell out of both events, as they should. But the hype and build for the Rumble event was bigger and stronger because it was the first big deal and if it had been a bust, the more recent events, like the Super Show, probably wouldn’t even be happening.

5. WWE made the right move taking the tag titles off of the B Team.

FICTION: I was stoked to see Bo and Axel as the RAW Tag Team Champions and I wish that they were still the champions. These are two awesome and incredible talents who always have been just on the verge of breaking through, but it never quite worked. And then, they finally get a push and it ends, just like that so the WWE can promote and build with Drew & Dolph. Nothing against those two because Drew is also a long time favorite of mine and I get why the WWE went with this decision, but that at it was at the expense of Bo, Axel and to a lesser extent, The Revival, just majorly sucks. Hopefully, we’ll see Bo & Axel get serious and be a major factor against Dolph & Drew as they try to get their tag team titles back. I’d also like to see The Revival really get a chance to do their thing too and give Dolph / Drew some scary moments in the process. I don’t like it, but I get why the title switch happened. Hopefully, it won’t be the end of the B-Team as a result.

6. What is your excitement level for the WWE Hell in a Cell PPV?

Maybe a 5 out of a 10. My whole enthusiasm for the WWE product as of late has been down a bit and to be honest, with all of the hype for All In, Evolution and the upcoming Mixed Match Challenge, I had forgotten that the HIAC event was even coming up. It’s a stacked show as pretty much all the WWE big events are and I’m sure that on the Friday or Saturday before the PPV, when I do my predictions, I’ll be amped up and looking forward to that Sunday night, but right now, as I write this, it’s just a big “Eh” at best.

And that’s it for now. Questions, comments and thoughts are welcome and appreciated. Until the next time my friends, I’m out of here. Take it light and I’ll catch you on the rebound. Take care. 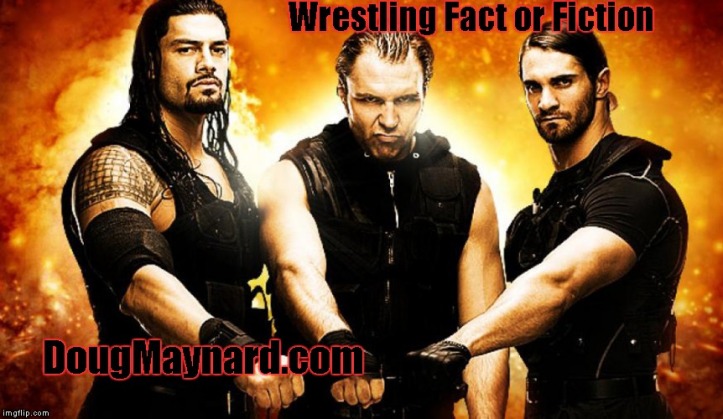