The questions are from Mack, Jesse and Dawn, Let’s do this…

Is Finn Balor the Bob Backlund of the modern era?

I don’t really see it. Balor is a great wrestler as was Backlund, but they represent two different eras of wrestling and their styles and personas are nothing alike. Bob, before becoming the crazy “Mr. Backlund” was about as bland and generic as a wrestler can be, but was so damn good in the ring with such a strong and credible background, that Vince McMahon Sr. stood behind and supported him anyway. Balor has charisma and can talk, not to mention has that neat little “Demon” gimmick to fall back on as well. The fans are behind and support Balor as does HHH. It’s just Vince Jr. that needs to be convinced.

According to Ric Flair, Harley Race has been diagnosed with terminal lung cancer. Thoughts?

Harley has clarified and although it’s true he’s being treated for lung cancer, it’s not “terminal”. He says that he’s doing well and treatments are going good and he expects to make scheduled appointments and commitments. It’s sad to hear that Race, one of the greatest wrestlers of all time and an 8-time NWA World Champion, is having to deal with this, but if anyone can kick cancer right in the ass, it would be Race. Best wishes to the champ and prayers from all of us here at DougMaynard.com.

Is it time to allign The Club (Gallows & Anderson) with either AJ Styles or Finn Balor?

If Gallows and Anderson are planning to stick around in the WWE for the long term, it would probably be best to give them a partnership with either AJ or Balor and pick up where they left off with The Club. As just another tag team, it’s obvious that they’re at the bottom of the totem pole, but as partners for Balor, to help in the war against Lashley and Lio Rush, they could be the equalizers and if AJ needs a counter to Daniel Bryan’s sidekick, Eric Rowan, who better than Gallows and Anderson? I know that since AJ and Balor are both faces at the moment, WWE would rather have them succeed on their own, but with the numbers game against them, having some backup in the form of Gallows and Anderson would be a good thing for all parties.

If Kofi wins the WWE title at Wrestlemania, does that mean we get a “New Day Unicorn Style” WWE Championship belt to replace Bryan’s current title belt?

If only for the purpose if merchandising, I could see WWE doing just that. A rainbow colored Unicorn styled WWE Championship belt would be popular with the kiddies and makes lots of money, but in all honesty, I hope that it doesn’t happen. I don’t mind subtle changes to the title belt every so often, but I didn’t like the spinner belt that Cena had and I don’t think I’d like a New Day edition of the WWE title belt either.

Who is the first person that comes to mind when you see the “big Gold belt?”

Simple answer. When I see the “big Gold belt” that was the WCW World title and then later, the WWE World Championship, one name immediately comes to mind and that’s the man who that belt was designed for in the first place, the 16-time Champion, Ric Flair.

Who is the first person that comes to mind when you see the “Domed NWA World Championship” title belt?

Many many people have been the NWA Champion and held that honored championship, but the one that stands above them all and I immediately think of when I see that belt, currently held by Nick Aldis, is the man I spoke of earlier, the true GOAT of professional wrestling in terms of being legit tough and a true bad-ass, Harley Race.

A very talented and charismatic woman who “gets it”, as both a character and as an in-ring performer. I would love to see her back as a part of the WWE at some point, with or without her hubby, but I doubt it’ll be happening anytime in the near future. One of my personal favorite female wrestlers of the past ten years.

What was your reaction, back when you were younger, when you saw wrestlers getting random, yet massive character changes, like One Man Gang to Akeem or The Iron Sheik to Col. Mustafa?

I generally thought it was pretty stupid and didn’t get it, but whatever right? I was there for the wrestling and I appreciated the entertainment, even if it did insult our intelligence from time to time. But for the most part, I didn’t give it too much thought.

If WWE was to bring back “General Managers” for RAW and Smackdown, who should they use? Old faces or new characters?

I kind of wish they would bring back the alternate to the McMahon characters to RAW and Smackdown, be it General Managers or whatever they want to call them. I get it that the WWE wanted to change things up and now you have Shane as a face, HHH and Steph as tweeners and Vince as the big bad and that’s all well and good, but I’ve always been of the mind that we should never see any of the McMahon’s on TV unless there’s a really special reason and purpose. For a person to handle the day to day tasks of running the shows, at least in kayfabe terms, there should be a buffer in place between the McMahon family and the WWE superstars. I don’t really care who they use as the “authority figure” for each show, so long as it’s not a McMahon. Of past GM’s, I’d be cool with Paige coming back to Smackdown or maybe William Regal moving up from NXT to a role on the main shows. Please don’t go back to Kurt Angle or Baron Corbin or Shane McMahon. I would be interested in maybe having Sting come back and do something. So long as the “authority figure” is someone who has a reputation that demands respect and can do well in the role. I’d like to see Curtis Axel have a crack at a role like this. “Hurricane” Helms would be good too and how about Bruce Prichard? There are people there that could do the job and do it well if only given the chance.

And there you go. My thanks for the questions. Any comments, thoughts or questions, drop me a line. Thanks for reading. And with that, have a great one and don’t forget to support your local Indy wrestling. Take care. 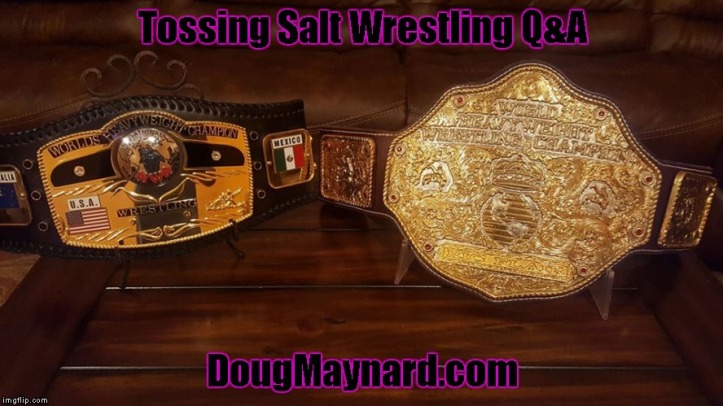