I am watching Money In The Bank on my phone as I type this. It’s been an interesting show with some good action and a few surprises. No spoilers here though. Just a few questions from Jesse and Matt, as well as a few answers from me. Let’s do this…

Do you think that Alexa Bliss is in danger of being pulled from the ring permantly ala Corey Graves / Paige due to repeated concussions?

I think this is very much a big danger for “The Godess”. She’s young, not even thirty years old yet, and has had several concussions over a relatively short period of time. Much like Corey Graves and Christian before them, if the WWE doctors decide that she’s way too danger prone, they will not hesitate to pull her from the ring permanently. I’m sure that, as “A Moment Of Bliss”, plus her time as an assistant to then acting RAW General Manager Baron Corbin shows, the WWE will find work and a role for her even if she isn’t able to wrestle, but risking her health is not a chance they’ll take but so many times. I hope all works out for Alexa and she is able to return to the ring full time, but if it doesn’t happen and she’s not medically cleared, I won’t be surprised.

Thoughts on the passing of Ashley Massaro?

Any time that anyone passes away, it’s a sad moment. I remember Massaro, but not very well. She posed for Playboy, dated Matt Hardy and was passable in the ring. I think she also appeared on Survivor, but I’m not sure on that. I just hope that now, she’s found peace and the happiness that seemed to elude her in life. RIP Ashley.

Do you think Arn Anderson, Dean Malenko or Brian James (Road Dogg) will end up working for AEW?

If Arn and Malenko do not end up working for AEW as Agents or Producers, I’ll be very surprised. Both men have a wealth of knowledge and would be extremely valuable for any company where they end up working. I think it’s just a matter of time. As for Road Dogg, while he’s stepped down as the head writer for Smackdown, he’s still, so far as I know, under contract and working for the WWE and I think if push comes to shove, that’s probably where he’ll remain for the immediate future.

Thoughts on the Mighty Igor?

A former AWA World Champion, Igor is a man I only remember slightly. He played the simpleton “dumb polack” who had the mind of a child, but was amazingly strong. The two things I remember most about Igor was when he worked the Carolina’s in the mid-70’s in a feud against Masked Superstar, who was managed at the time by Boris Malenko (Dean’s father). They did the old “lit cigar to the eye” story and Superstar and Malenko would outsmart Igor at every turn, but then he’d get revenge with the strength and still manage for revenge. The fans loved Igor and he also regularly did “tests of strength” like bend a metal bar, break cinder blocks, etc. The other thing I remember is a TV match where Igor faced Crusher Jerry Blackwell. Blackwell was a big man, easily 400 plus pounds, and Igor was just tossing him around like a basketball in that ring, from one end of the ring to another. For a ten year old kid watching on TV (me), it was pretty amazing.

Is the name “Kabuki Warriors” for the team of Asuka and Kairi Sane racist?

Considering that Asuka and Sane allegedly picked the name, I would say no. Plus Kabuki’s are a Japanese legend and since Asuka and Sane are both Japanese, it may be stereotypical, but I still wouldn’t call it racist. One of the greatest Japanese stars of all time, from the 70’s and 80’s was The Great Kabuki and I see it as the two ladies paying homage to this iconic legend. People today try to find racism in everything. People need to grow the hell up.

WWE has allegedly fined Lars Anderson $100,000 for racial and homophobic comments he made nearly a decade ago. How is this legally possible?

I don’t think it is. I think that it’s all kayfabe and WWE may be saying this to let the situation blow over, but would it stand up in a court of law? I don’t think so. If there is an actual fine and Lars, later down the road, decided to take it to court and file a lawsuit, he’d win easily. To punish someone for something that happened long before they ever worked for WWE, and it’s ever more questionable since he’s not an “employee” and is a “private contractor”. This “fine” is all for show, nothing more.

Are you planning on watching AEW when it debuts on TNT?

Absolutely. My crazy work schedule may not allow me to see it live every week, but so long as we have InDemand, I will make it a point to watch every week in the beginning at least.

Lucha House Party versus The Mexicools – who wins?

Gotta go with Super Crazy, Psicosis and Juvi on this one. The Lucha House Party are talented guys and all that, but the Mexicools, with their Juan Deers and leaf blowers, plus the power that is “the Juice”, they’re not just cool, but they’re Mexi-cool. The old guys win.

And there you go. My thanks for reading. Any houghts, comments or questions, then drop me a line. Have a great night and I’ll see you later. Take care. 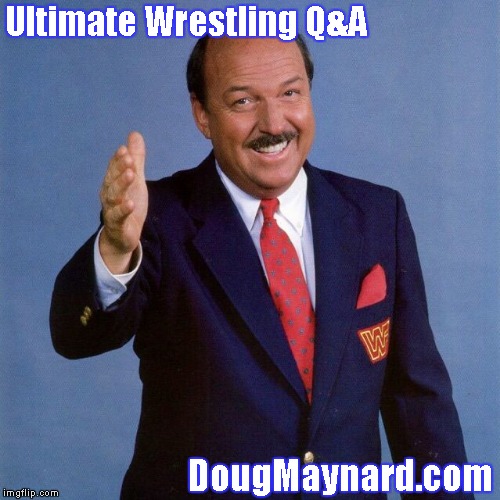