Coming up on Sunday, October 20, 2019, live on pay-per-view is Impact Wrestling and the most recent “Bound For Glory”. It’s sold out and coming from Villa Park, IL. Several matches have been announced and it’s time to break out the “Shades of Sister Cleo” crystal ball. It’s prediction time. Let’s do this…

This should be a good match and I’m actually excited for it. Callihan is a damn good performer and Cage, he’s probably the best guy not AEW or WWE out there right now. In a few years, when he goes to a bigger company, he’s going to be a big name. I don’t think it’s time for Cage to lose the title, but I keep hearing rumors that he’s been dealing with injuries so who knows? Callihan was on the border for a long time about staying with Impact Wrestling, but he’s there and ready for a big push. I don’t think Cage should lose the belt, but if it’s going to happen, then this will be the time and place. I think Cage stays with the title for a bit.

Who are the other two competitors? Does it really matter? Crist has been a good champion thus far, but Tessa Blanchard is the big name making a move for Impact right now. She’s the one making an Impact for women everywhere and I think she’ll do it one more time. New champion as Tessa climbs the ladder and wins the title.

These women can go and go as well as any man out there. Dashwood was majorly ignored when in WWE and since her release, she’s been making up for lost time and just doing some incredible things. And Taya Valkyrie is so damn good. This may well be the match of the night. And I think when the smoke clears, we’ll have a new champion in the house.

This one can and should go in any direction and it wouldn’t be an upset. Swann and Mack are a good team but I just don’t see someone as talented as Swann being a part of a tag team for a long period of time. He has singles champion written all over him. RVD and Rhino are two ECW legends who are past their prime and a tag team is where they belong and need to be right now. And The North, they just rock and kick ass. I’ll say a short run title change happens here. I think nostalgia will rule the day and we’ll hear “EC-dub” chants echo all through the arena as Rhino & RVD win themselves some tag team gold (and lose it back to The North at the next PPV event).

Elgin is so good and so under-rated. He belongs in AEW or the WWE and probably in the future, he will be there, but for now, it’s all about making an Impact at Impact and this will be one more example of that. I’ve seen Marufuji mentioned a few times on some Japan wrestling recaps and he’s a damn good performer as well and tough as a three-day steak, but he’s not the big star of days to come. Elgin wins.

I watched some clips of the Little Rascals on YouTube a few days ago. That has to mean something. A great and fast paced match to be sure, but I’ll pick Alflafa, Spanky and Buckwheat, with an assist from Petey, to win.

A gauntlet match and the winner gets to pick a title match. I guess it’s Money In The Bank done Impact style. The participants have not been announced and I have no idea who’s competing so for the winner, I’ll pick the last person standing and the man who wins the gauntlet. Yeah, I’m cheesing out here. Get over it. What? You want a name? I don’t even know if he’s going to be there or is even a part of Impact anymore, but I’ll say Eddie Edwards. I don’t see him anywhere on the card and he’s a major player on the roster. So unless he shows up in the X-Division match, he’ll be in this match instead.

And there you go. My thanks for reading. So am I right or wrong? What are your predictions for this event? Do you even still watch Impact Wrestling? It’s on AXS TV now and you should. It’s rising again and well worth the time and effort. And now, I’m out of here. Have a great night and let me know what you think. All comments, thoughts and any questions are welcome. Have a great one and I’ll see you at the matches. 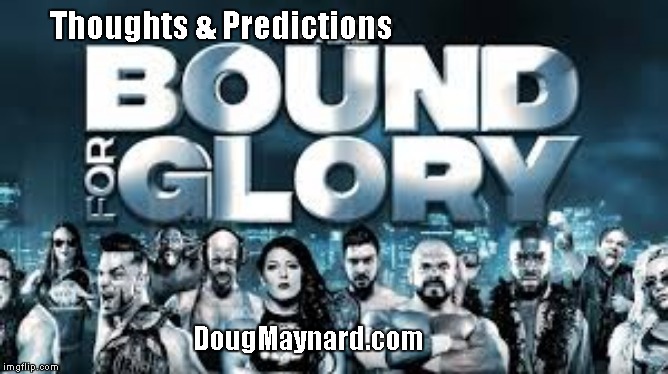