Coming up on Sunday night on the WWE Network, live from Blackpool, England, is the event we’ve all been waiting for, NXT UK Takeover: Blackpool II. Are you ready for a few thoughts and predictions? Let’s do this…

This should be an excellent match, but I don’t see WALTER dropping the WWE UK Championship anytime soon. I do expect that we’ll see a lot of near falls and that Coffey will take the champ to the limit, but when the smoke has settled, the title will stay with WALTER.

If a title is to change hands, this will probably be the match where it happens. Gallus are impressive as the champions, but I think we’ll see a changing of the guard here. I like the team of Andrews and Webster, but let’s call it for Aichner and Barthel. I just have a feeling that the Imperium will walk out of Blackpool with their luggage full of championship gold.

Kay Lee Ray is good in that ring and has been an excellent champion, but I think that Toni Storm is the one to watch here. There’s something about her that just says “watch me” and I think she has something to prove here. I think this title is changing hands.

These two men are both not well known to me and I have no idea who should or shouldn’t win here. It’s late and I don’t feel like doing a YouTube search to learn more right now so I’ll just make a pick at random. I like the name Trent so he gets my pick for this match.

Both of these young men can work well and are the future of WWE in the UK. It’s hard to make a call here since I like both guys. I guess that for no reason at all other than I like his name – it sounds like a character from General Hospital or All My Children – I’ll go with Jordan Devlin.

And there you go. My thanks for reading. Any comments, thoughts or questions, feel free to drop me a line and we can talk. Until the next time, take care of yourself and be safe. I’ll see you at the matches. 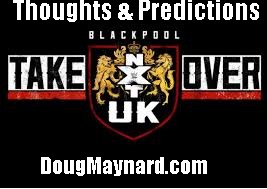