We’ll wait. And now, on with the second part. Comments and thoughts welcome. Thank you…

Yesterday was a very sad day for the WWE, many WWE talents, and wrestling in general. Due to major budget cuts as a result of the COVID-19 pandemic and not being able to run live shows, tour, etc, the WWE decided to clean house and release over thirty talents from their contracts. Some of these names, those who worked as “Producers” and “Agents” are not technically fired, but instead under furlough so when the business picks back up, they have jobs again, but for the stars of RAW, Smackdown, and NXT, it’s most likely the end of the line for this chapter of their lives and the time as a WWE Superstar has ended. They still have a ninety-day no-compete clause to finish out so the money is still coming in for at least the next three months, but after that, who knows what’s next?

And that is what I’m going to address now. I’m not worried about the agents or the trainers from the Performance Center because once the smoke clears and things get back to what passes as normal, they will probably be back at work under the WWE banner or else teaching and training future talents elsewhere. Also, there are so many of them that when added to the list of in-ring talents, it would make this piece way too long. NXT talents, I’m not going to touch either since, no offense to them, no one even knows who they are yet including myself and what’s the point. People in developmental come and go all the time and it’s rarely newsworthy.

But the main roster names and talents, those are the people who we, the fans, have invested our time into and enjoy seeing and watching perform their art each week. I want to look at each and discuss what the future may or may not hold for each talent, where they may show up next and what I would like to see them do. So are you ready? Let’s do this…

Let me be honest here. Lio Rush annoys the hell out of me. But that being said, the man can work in that ring and he’s a great talker. And for someone so young, this man has future star written all over him. Just a couple of months ago, he was the Cruiserweight Champion. There was even some talk, mostly by Rush, about going back to make amends with Lashley, something that could only be seen as a positive for Lashley’s character. He and Lio worked great together. And now, he’s gone. I don’t know what the future holds for Lio, but he won’t be out of work long. He has a music career on the side and I could see him working towards that and even getting into acting at some point as well. The guy is charisma and money. My gut instinct says MLW or maybe ROH, but so long as the ego stays in check, the sky is the limit for this kid. He’ll be back at WWE at some point, but

I put these two names together because that’s exactly how I see them and how they should be booked, as a unit. ECW is everything a WWE superstar should be, period, but for whatever reason, WWE and Vince McMahon just didn’t get it or him and he’s languished in obscurity for a couple of years now. Maverick has had a much better time of it, as the General Manager of 205 Live and then in his great feud with R-Truth over the 24/7 Championship. Drake knows how to get over and is a great character and entertainer. For these two men, I would think the immediate future might be a visit to Impact Wrestling where they would immediately be top guys and be able to, dare I say it, make one hell of an impact. I think Maverick will have the chance to come back to WWE in the future and if that happens, that would be great. EC3, I can’t see it going quite as well. But these guys are damn good and belong on the top of a card somewhere.

A talented wrestler, a good singer and who would have thought it, a damn good announcer as well. How did they fire this guy as an announcer, but David Otunga still has a job? I seriously doubt that any kind of reunion with former Vaudevillian partner Simon Gotch is in the works, but that may be an option. I could see English working ROH as a wrestler/ commentator, taking the spot of Colt Cabana who has now moved on to AEW. English is married to Shaul Guerrero, the daughter of Vickie and Eddie Guerrero so I’m sure that any place where the Guerrero family has contacts, there would be a place for him as well. I’d love to see him pop up wherever Rusev ends up as a manager and tag team partner. I just want to hear him sing “Rusev Day” one more time.

From all reports, Jose is a great guy and good in-ring talent. The only problem is that I can’t see his gimmick working anywhere else. If he changes it up, he would lose everything that makes him special and different, but if he stays the same, it’s a future of Indy shows and personal appearances at conventions. He’ll still be wrestling and making money, but it’s a whole different life. I think Jose is adaptable though and will do okay. I don’t see any big companies signing the former Bunny buddy, but the career will continue and go on.

No surprise here. Mike has been asking for his release for a while now and Maria, oh vey! Where should I begin? Her run since coming back to WWE has been a disaster. She has been on the sidelines pregnant for the majority of the time and while that’s not necessarily a bad thing, it severely limits the options for how to use her and her character. Maybe Mike and Maria will go back to ROH? For Mike’s sake, I hope so. The guy has skills but rarely got the chance to show them in WWE. ROH used him well and even though the old cliche is that you can’t go home again, maybe this time will be the exception.

Rowan is a monster of a man who would make a good mid-card talent for any company. He’s not much of a promo guy that I’m aware of though and doesn’t have the charisma to be a huge solo star. His best option, if it’s even possible, would be to head to AEW and be used as an enforcer and weapon by his former partner, now the head of the Dark Order, Brodie Lee. They were one hell of a tag team and they were over even if WWE and Vince McMahon didn’t quite get it. He should at least give Brodie a call and see what the possibilities are.

A decent wrestler who was long overshadowed by her two partners in the Riott Squad, it appeared that Logan was just on the verge of breaking out a bit, but WWE wasn’t sure where to go with her. An untapped potential just looking for an opportunity to shine and be noticed. I’d like to see what she can do as a Knockout in Impact Wrestling or even over at ROH. We have not heard the last of Sarah Logan and I wouldn’t be surprised to see her back in WWE at some point. She’s a future star and WWE just hasn’t realized it yet.

Two of the most gifted and talented guys on the WWE roster and yet neither has been used in over a year. This cut makes sense and was long overdue. The Colons will be fine and will continue to do as they have been doing, working for Carlos Colon and keeping the WWE and wrestling in Puerto Rico strong and above water. I had long hoped that one day, WWE would realize just how good these men are and use them properly, but alas, it was not to be. I don’t expect we’ll see them again on a major national stage, but I would be happy to be proven wrong and surprised. Maybe an appearance at the NWA Crockett Cup? We’ll see what happens. These men are young and damn good at what they do. And like their brother/cousin Carlito, they’re cool.

And there you go. If I missed anyone from the main roster releases, I apologize. As I said earlier, I didn’t do the Producer/Agent releases or the NXT releases because I expect that, once business picks up again, most of the agents will be back. And I’m not familiar enough with the developmental stars from NXT to have any kind of opinion. I do feel for all of these people though and everyone affected by this dreaded COVID-19 pandemic. Lives are changing forever each and every day and these men and women are just a few of many. I hope that everyone released by WWE manages to keep their head above water and rebound in the best and most positive way possible. As one chapter ends, a new one begins and the best is yet to come.

And there you go. My thanks for reading. Any comments, thoughts or questions, please feel free and drop me a line either here at the site in the comment section, at my e-mail of Doug28352@yahoo.com or on Twitter at @Doug28352. Follow me. I follow back.

And with that, I’m out of here for now. Until the next time, stay safe and be careful. It’s crazy out there. Don’t forget to support your local Indy wrestling. I’ll catch you on the flip side. Take care. 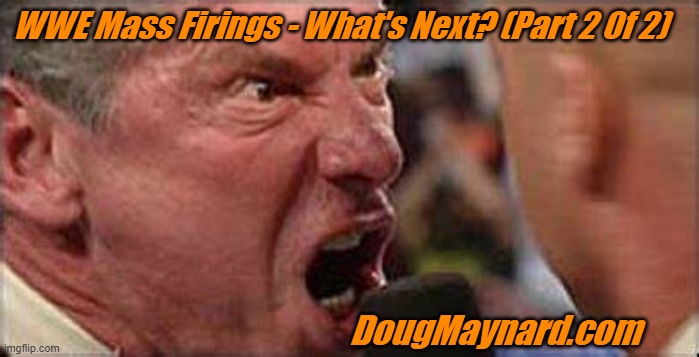