A Day Of Dougie: Fake Eyelashes, Pink Whitney & South of the Border…

Welcome to a lovely Sunday afternoon in quarantine and another mind-numbing edition of my blog piece, A Day of Dougie. The rules are simple. I reach into what we call “The Magic Bag”, draw out three topics at random and write. But guess what? Today, we’re changing the rules. Two topics are already on my mind so I’m going with those and will only be drawing one topic from the inner regions of the Magic Bag.

I’ll never get that bag worked down at this rate, but it’s cool. I have enough different topics in there to write for the next twenty-three years, a year longer than my latest sexy male obsession has even been alive. I just hope the future blogs are as interesting and fascinating as he is. Damn, I wish I had me some tigers and some meth. I’d have all the fellows knocking at my door then. But alas, I only deal in fine spirits so… never mind. Let’s move on.

The topics for today are Fake Eyelashes, Pink Whitney, and South of the Border. Yeh, this one might get a bit odd. We’ll just have to see what happens. So are you ready? Let’s do this.

What is the deal? Yesterday while at work, I counted at least eight girls wearing fake eyelashes. Those were just the ones I noticed and I’m sure that others were wearing them as well, but I’m only speaking towards the girls (and one transvestite) that came into my line to be waited upon. When did these things make a comeback? I know they were big in the ’50s, but then they faded away as women became more relaxed and natural in the ’70s and ’80s. But guess what? They’re just like roaches, herpes and bad boyfriends. They’re back.

But why? That’s the question. Why are these girls wanting to walk around with two big fuzzy caterpillars on their foreheads? If something is huge, hairy, and sticks out farther than your nose, it’s probably a safe bet that it’s not adding to your beauty. There’s a thing called mascara. Use lightly and apply to your real lashes and it will generally get the job done and enhance your looks. Gluing two big fake tarantulas to the spot about your eyes where it looks as if they’re ready to either fight to the death or do a mating ritual, that just doesn’t cut it for me.

Here’s the bottom line on this whole topic. If they don’t look fake and make you look or feel better, then, by all means, go for it. But if it looks as if a rat is having spasms on your forehead and the fakeness is obvious, like a person who uses only big words, a crackhead expressing loyalty and love or a new boyfriend or girlfriend saying, “I love you” when that Corona-check has just dropped into your bank account, then don’t do it. Leave the fake eyelashes at home, quit fluttering the in the wind and stop ruining my life. Let’s move on…

What is the obsession with Pink Whitney? For those of you who don’t know, Pink Whitney is a new flavor of Amsterdam Vodka that came out a few months ago that was “inspired” by Ryan Whitney’s favorite drink. Who the hell is Ryan Whitney and why should anyone care about his favorite drink. It’s Pink Lemonade flavored and people are going crazy about it. It’s just unreal how many people have come into our store asking about this drink. We ask have you ever tried it? And they answer “No!”. What flavor is it? “I don’t know!”. But everyone has seen it on Facebook and it’s the latest thing they can’t live without and have to have, right now! It is pure insanity.

When I first heard the name, I immediately thought of Whitney Houston. But then I realized that naming an alcoholic beverage after her would be kind of dumb since she didn’t drink alcohol much. She preferred coke. And I doubt that any part of her was ever pink or is pink now. Probably more of a greyish color with the decomposition and all. I can picture Bobby Brown sitting around though, drinking a bottle of this beverage, crying and saying, “Why baby? Why?”. Well, either that or “where my Corona check at? I gotta go see the man!”. Whatever. That’s his prerogative. Back to the Pink Whitney beverage.

It’s the latest thing and yet, so far here in the Scotland County ABC, we have not been able to get it. We don’t have it now, haven’t had it yet and most likely won’t get it in the immediate future. Maxton, Hamlet, and several other surrounding stores have been able to get it, but our store is like the red-headed stepchild of ABC and we don’t get the good or new stuff until after the fact. So quit calling forty-five times a day. We don’t have it. When it does eventually show up, I’ll let you know. Until then, give it a rest… please! But never forget, I will always love you (unless you wearing big bushy fake eyelashes). Let’s move on and wrap this up.

South of the Border…

A tourist trap location located about twenty-miles or so south of my home. It’s Pedro and lots of fireworks, bars, cheap motels, and t-shirts.
I bought myself a bullwhip there once. I was deadly with that thing. It’s a fun little spot to spend a few hours, but there really isn’t all that much too it anymore. Political correctness has had an effect and all the classic billboards and advertisements are considered racist and insensitive now. People need to get a life and get the hell over it. South of the Border was cool as heck when we were all younger. It’s still a must-stop location if you’re traveling down Hwy 15-501 towards Myrtle Beach. And with this particular south of the border location, we don’t even need to build a wall.

And with that, it’s time to wrap this up for the day. Comments, thoughts and any questions are welcome and appreciated. Talk at me, my peeps. Until the next time, stay safe and stay home. And never forget that today and every day, it’s a Day of Dougie. Have a great one. 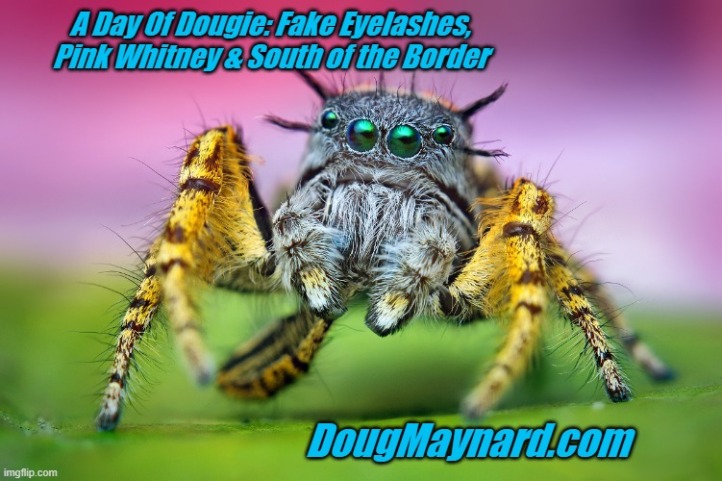