Good morning and how are you doing today, this lovely Sunday morning? It’s still early and fortunately, no one else has woken up yet so it’s still quiet and semi-peaceful here on the homefront. I’m sure that will change soon enough, as soon as the cat realizes that I’m not paying attention to him or as soon as the mother-figure wakes up and realizes that I might be enjoying myself and relaxing. That’s not allowed so they’ll be in here trying “not to bother me”, but hover around and talk constantly. It’s just a matter of time so I’d best get busy while I can. So here we go…

Welcome to a Day of Dougie. “And what is the topic of discussion today?”, you ask. That’s the cool thing. I don’t even know yet. I’ll be reaching into the infamous “Magic Bag” in just a few minutes and drawing out a topic or two so I can talk/rant/BS about it. That’s what makes this particular column so unique and so much fun. I don’t even know what I’m talking about until it’s time to get busy and tackle the matter at hand… and sometimes not even then. I sound like a politician, don’t I? Maybe I should run for the Democratic nomination for Vice-President? I’m more qualified than Stacey Abrahams and that’s a fact, but then again, so is my cat. And just about any other living, breathing human out there. That woman is such an ass-clown and a joke. And that people even begin to take her seriously is even a bigger joke. Speaking of a joke…

What’s brown and sticky? A stick.

How do snails fight? They slug it out.

You’re welcome. And now, let’s talk about a few things. I have one topic already in mind and we’ll go to the bag for another. My first topic is…

Yes, these are real things. And no, I’m not talking about gym equipment for chest development. And no, it’s not another name for the Nudie Bar or Hooters. I was at the most vile and evil place on Earth, and no, it’s not Detroit. I’m talking about Wal-Mart. I was there, not by choice, but with my bro-son a couple of days ago. He was getting baby stuff for the Princess and I was just looking around and trying to spot Satan. It’s Wally-world so you know he’s there somewhere. And my eyes glanced over the shelves and I saw this and said, and I quote, “What the fuck?”.

There is a whole aisle devoted to breastfeeding and boobie stuff. Was I in Wal-Mart or is this the local Adam & Eve store? I guess it’s hard for women who are breastfeeding to keep a constant supply of milk coming for their little ones (and Daddy) and use supplements to aid the creation of the natural nourishment from the mammary glands. There are all sorts of snack bars, cookies, and other assorted treats and the only thing they seem to have in common is that they help with lactation.

And as a man, I find that very disturbing and creepy. What if Daddy wants a late-night snack and that leftover chicken salad in the fridge just isn’t going to cut it so he grabs a handful of cookies. And after eating them, he realizes that he just ate a bunch of boobie bars. Does the chest get bigger? Do hormones start acting up and he acts like Kevin Nash in the movie, “The Longest Yard”? Does he forget how to drive or pick a place to eat? Inquiring minds want to know.

And what kind of name is “boobie bars” anyway? I can see the simplicity and appeal in the name for advertising purposes and I guess it makes sense, but there will always be those with a juvenile mind (me) that will note the name and make crude, suggestive comments about boobies as a result. I guess it’s a moot point though since everyone loves boobies. And admit it, it’s true. Whether you’re straight, gay, man, woman, child, or money, a pair of boobies is a fascinating thing. They’re so bouncy and fun to look at and play with. They’re just like puppies.

But the bottom line is this. Boobie bars, they’re not for men. They’re not for kids. They’re for the girls, both literally and figuratively. And that name. It’s funny. I don’t care who you are. Say it three times really fast. Say it to an 8-year old. See if you don’t end up smiling. And may the force be with you.

I’ve rambled enough on that so let’s find at least one more topic and then put this baby to bed, preferably after a nice and nutritious meal of Puffs and mashed potatoes. See, boobies not required to make the baby happy. They’ll make Daddy happy though. Now, what was I saying? Another topic. Where my bag? We reach inside and pull out the second topic and it’s…

A legendary singer, songwriter, author, and story-teller from many years ago. He’s noted for such songs as “Sneaky Snake”, “Old Dogs, Children & Watermelon Wine”, and “I Love” and wrote the song, “Harper Valley PTA”. He’s had over 26 Top Ten Hits and is known to his fans as “The Storyteller”.

The main thing for me that comes to mind about Hall is that we have one album here that I used to listen to repeatedly as a youth from this man. It was a “Greatest Hits” album and came out in probably the mid-seventies. And it was good. And on the back, where most bands would have reviews or a personal message to their fans, Hall had written a story about what was in his trash. Yes, he surveyed what was being thrown away and what anyone digging through his trash would find. It was an entertaining read and an idea that I’ve used, in different variations, many times over the years. So now when you’re shaking your head at some of the topics I’m writing about, you know why. It’s Hall’s fault.

But aside from all of that, Tom T. Hall is a great songwriter, a truly charming and entertaining person, and a country music legend. Here’s a video to show just a sample of what this man can do.

And with that, I’m out of here. I hear stirring in the back of the house so the peace and quiet are nearly at an end. She’s waking up! So my thanks for reading. Any comments, thoughts, or questions, please feel free to drop me a line. Let’s chat. I can be reached here at the site, at my e-mail of Doug28352@yahoo.com, or on Twitter at @Doug28352. Thanks for reading and remember that every day is a great day… if you make it a Day of Dougie. Take care. 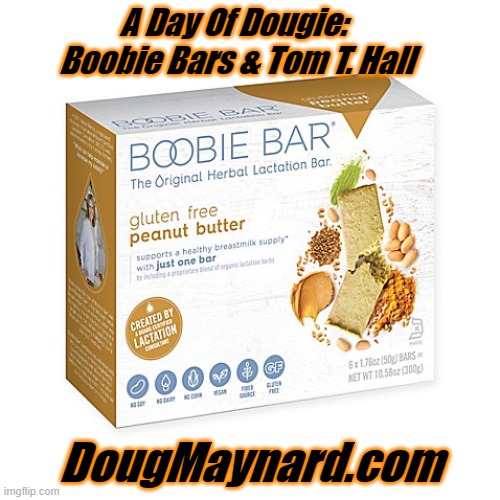