Ten Movies, Ten Days, One Scene, No Explanations (Part 2 of 2)

Recently, as part of a group about movies and television, founded by writer, director, podcaster, cool dude, and movie aficionado Brent Robinson, he of SMF Cyberspace Fame (go find it on YouTube or at SMFCyberspace.com), we had a thing called “Ten Movies, Ten Days, One Scene, No Explanations). The title is pretty self-explanatory. We posted scenes from different movies, ten days in a row, and gave no explanations. The clips spoke for themselves and were a great mix of drama, comedy, angst, emotion, and memories from the big screen in years gone by. It was cool!

And now, for my readers here at the site, both of you, I’m going to share my picks, the movie scenes I selected, but with one slight twist. I’m explaining why I picked each scene. So ten movies, ten scenes, two columns, and a brief explanation for each. Doesn’t that sound like fun? That’s why we’re here. Let’s do this…

Day 6: Every Which Way But Loose (Ma versus The Black Widows)

Who doesn’t like Ruth Gordon? When you think of feisty old women, no one did it better. And leaving a poor, defenseless old woman alone? Shameful! Watch out for the old women though. They’re not as defenseless as they seem.

Midgets, farts, and every gay stereotype joke that can be inserted in one scene. What’s not to love. This is from when everyone didn’t have a stick (or something) up their ass and we were allowed to laugh at stereotypes and stupidity. It’s just a movie. Lighten up.

Fresh off the success of Airplane and The Naked Gun Movies, Leslie Neilsen was on a roll and when he teamed up with the original possessed by the Devil chick herself, Linda Blair (The Exorcist), the gloves were off and we had a fun, good movie. How do you get rid of the devil? Rock & roll, bitches.

The American Pie movies were good, but mostly hit or miss. But when Seann William Scott, playing the role of Stiffler came on camera, it was a definite fun time and good scene. Here’s Stiffy getting all jiggy with it because everyone wants the Stiffmeister. Don’t believe me? Just ask him and he’ll tell you.

It’s Lestat teasing of things to come. It’s Guns & Roses remaking a song, Sympathy For The Devil, and rocking as only they could. It’s the perfect ending scene for this movie. The books that make up the Vampire Chronicles, written by Anne Rice, are amazing to read and there was doubt that any movie could capture the magic and essence of those stories. This one did and it was a great way to wrap up the first film.

And there you go. That’s what I posted in Brent’s group and now, they’re here for you to enjoy. Thank you for reading. So what are your favorite movie scenes? Let me know in the comments section or else at my e-mail of Doug28352@yahoo.com. Follow me on Twitter at @Doug28352. And with that, I’m out of here. Stay sweet, stay safe, and I’ll see you at the movies. 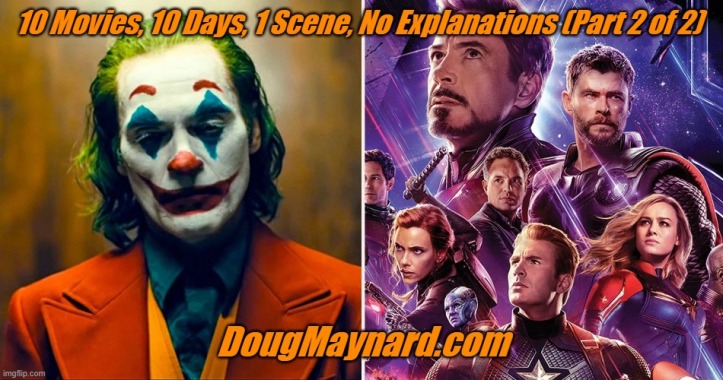