Ten Movies, Ten Days, One Scene, No Explanations (Part 1 of 2)

Recently, as part of a group about movies and television, founded by writer, director, podcaster, cool dude, and movie aficionado Brent Robinson, he of SMF Cyberspace Fame (go find it on YouTube or at SMFCyberspace.com), we had a thing called “Ten Movies, Ten Days, One Scene, No Explanations). The title is pretty self-explanatory. We posted scenes from different movies, ten days in a row, and gave no explanations. The clips spoke for themselves and were a great mix of drama, comedy, angst, emotion, and memories from the big screen in years gone by. It was cool!

And now, for my readers here at the site, both of you, I’m going to share my picks, the movie scenes I selected, but with one slight twist. I’m explaining why I picked each scene. So ten movies, ten scenes, two columns, and a brief explanation for each. Doesn’t that sound like fun? That’s why we’re here. Let’s do this…

The movie is good, but this scene, featuring Robert Judd as “Scratch” is probably the best part. Steve Vai is amazing as well, but that’s another scene and seeing him get “beat” by Ralph Macchio is, pardon my pun, unholy and sinful. Great movie and an incredible performance by Judd and the others.

The word is that they did this scene in one take. How? I have no idea. But if you can watch and not laugh out loud or at least smirk and chuckle, you’re a better man than me. Porkys was under-rated as a film, but the comedy is there. Good stuff.

James Dean in what I believe was his best movie role. Rebel gets all the glory, but this is the one that put him on the map. ‘Nuff said!

Day 4: Dracula (Children Of The Night)

There have been many portraying Dracula over the years, but Bela Lugosi was one of the first and was absolutely the best. This is when we meet The Count and our lives were changed forever.

Paul Ruebens, better known as Pee Wee Herman, steals the movie in this classic “death scene”, arguably the greatest death scene of all time. For all I know, he’s still in the process of dying. The movie was okay. The TV series was far better. And Ruebens, playing the character of Amilyn, he just rocks… period!

And there you go. That’s what I posted in Brent’s group and now, they’re here for you to enjoy. This was Day 1 through Day 5. The remaining five will be up tonight or tomorrow.

Thank you for reading. So what are your favorite movie scenes? Let me know in the comments section or else at my e-mail of Doug28352@yahoo.com. Follow me on Twitter at @Doug28352. And with that, I’m out of here. Stay sweet, stay safe, and I’ll see you at the movies. 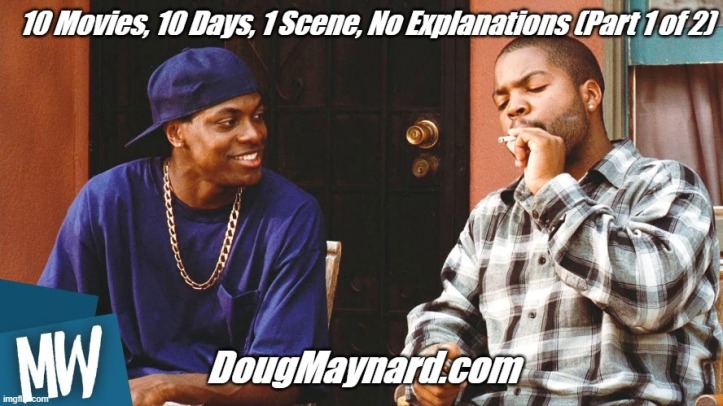