Coming up tomorrow night on the WWE Network is the pay-per-view offering, WWE Backlash. And of course, that means it’s time to channel my inner Sister Cleo and do some fortune-telling. It’s prediction time. So are you ready? Let’s do this…

For weeks, these two teams have gone back and forth in all sorts of competitions to determine who the better tag team is. And now it’s for the WWE Raw Tag Team Titles in what will probably be a forgettable match that no one cares about or remembers. Well, maybe that’s just me. Look for lots of high spots, near falls, and no-selling of bad & botched mumps. And the Profits will retain their titles and remain champions.

So, the “Greatest Wrestling Match ever”? Really? That’s a lot of hype to live up to and while I expect that this will be a top-notch match with two of the WWE’s biggest names at their peak of excellence, I don’t think that label and the hype will have its criteria met. But who cares so long as its a great match, right? As to who wins, do we end this now or keep the rivalry going? If Edge wins, then it’s over and both he and Randy can move on to other things. If Randy wins, we take it to the next level, a “Hell In The Cell”, perhaps? I think we’ll see it end here and Edge will move on to battle in the WWE or Universal Championship picture while Randy goes off and does whatever it is that Randy does. Both men will bleed, sweat, and pay the price. But when the dust settles, it’s the Rated R Superstar who takes that long-anticipated trip to the pay window with a big win.

Bobby has a manager now in MVP. He also has a psychotic and hot “wife” with Lana. What he doesn’t have is the WWE Championship. That last part won’t be changing anytime soon. Lana getting involved and having issues with MVP will cause a distraction to Lashley. Drew takes advantage and one countdown later, followed by the Claymore, Drew takes home a win and retains his title.

Braun wasn’t supposed to be champion in the first place and the thought of two men, especially these two men, co-holding the Universal Championship, strikes me as entertaining TV and some great action down the line. The numbers game is the deciding factor here and we have Miz & Morrison take the win and the title.

Asuka is awesome. Nia is a walking mess. To reward her with a major title right now would, in my opinion, send the wrong message to the locker room. Asuka retains and keeps her WWE Raw Championship.

If Jeff wins, then good triumphs over bad and the feud ends. If Sheamus wins, it goes on and gets bigger and bigger as we head to a huge blow-off match and final resolution. Jeff got the drop on Sheamus last night on Smackdown so Sheamus cheats and returns the favor by scoring a tainted win at Blacklash. And there you go.

So do we keep the belt on the new Champions who don’t need the belts or do we give it to the only regular tag team in the WWE’s Women’s Division, who have been great in the build for this match? Flip a coin because this is truly anyone’s match to win or lose. Personally, I think it will be an Iiconic kind of night. Yeah, let’s go with that.

Paul Heyman is out of power on RAW so how will this affect this match and noted Paul Heyman Guy Apollo Crews and his recent push? I love the tension that they’ve been building as of late with Andrade & Angel Garza and I think that will have an impact of some sort in this match. The title is secondary in this match as it’s more about Crews getting credibility and Andrade working the dissension in the Vega family story. Crews manages to score the win and will retain the belt.

And there you go. They may add a match with new Intercontinental Champion AJ Styles defending the belt sometime later today, but as of right now, 8:45 am, I haven’t seen any official notice of it. If they do, then Styles wins.

And that’s all for now. Thank you for reading. Will you be watching WWE Backlash? Who are your favorites to win and lose? Let me know in the comment section. Any questions, comments, or thoughts to share, then drop me a line here at the site or my e-mail of Doug28352@yahoo.com. Follow me on Twitter at @Doug28352. And I guess that’s all. Enjoy the show and I’ll see you on the flip side. 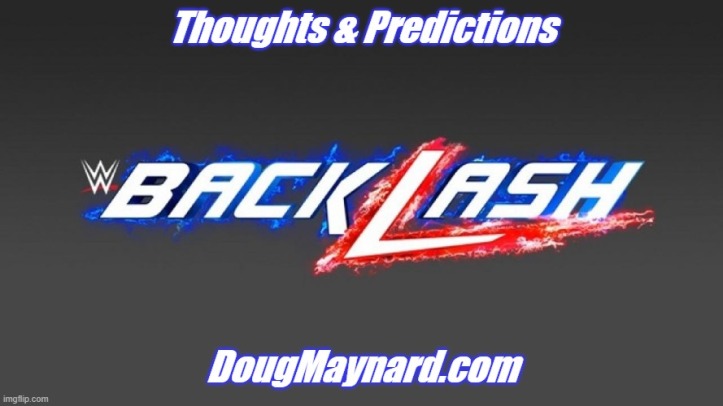