So here is the deal. Last night, live on the USA Network, WWE presented the NXT version of the Great American Bash, a big event to compete against AEW Fyterfest, which was airing over on TNT. And next week, as AEW presents Night 2 of their event, WWE will also be presenting another night of the Bash, a stacked card full of main event level matches.

This is all scheduled to air next week. So why am I here now to do my predictions for the show? Because they taped it last night and I want to give my thoughts with a clear head before spoilers start leaking out. One already has for the main event of the night, but I resisted the temptation and didn’t look to see who won that match. I resisted once, but for a whole week? That’s not going to happen. So better to do this now than wait until we already know all the match results. And with that explanation in the can, it’s time to do that Sister Cleo thing. It’s the WWE and NXT Great American Bash, Night 2, Thoughts and Predictions. Let’s do this…

This is the match where spoilers have started to leak. It’s the long time champion, Adam Cole defending against the company darling and everyone’s favorite, Keith Lee. I love these title versus title matches and I’m assuming that both titles are at stake so, at the end of the night, we have a double-champion. Will it be Adam 2-Belts or Keith 2-Belts? Look at what Becky Lynch started lol. Lee is the hottest guy in the company right now and I think it’s time for Cole to make that move to the main roster. It’s time for a change and Lee is on fire like few others before him. I think he’ll walk out with two belts in hand and as the top guy for NXT after a great match and a lot of back and forth for the ages.

Two of the best ladies in the business today in a good old fashioned street fight. Somewhere, Joey Styles is warming up his voice and will be screaming “Cat Fight” while watching the television come next Wednesday night. As for this match, the entire GAB event has been noteworthy by the absence of one Johnny Wrestling, aka Johnny Gargano. Gargano happens to be the real-life husband of LeRae. And wouldn’t it be a heel move for Gargano to get involved in a women’s match and help out his wife to steal a win when she’s getting her butt kicked? Works for me.

Legado del Fantasma attacked and beat up Drake Maverick. He wants revenge and needs a partner and gets Breezango? Fandango and Tyler Breeze to the rescue. I was wearing my Breezango “fashion violation” shirt earlier today, but then I had to go out and switched to a Zack Ryder/Curt Hawkins t-shirt instead. But anyhow, I am a big fan of this entertaining duo and in a team with Maverick, it should be entertainment galore. They won’t win and will get beaten by the Cruiserweight Champion and his faction. A great match, but a predictable outcome. I hope I’m wrong.

She’s back in NXT after a run with Impact Wrestling. And WWE hasn’t really done anything with her yet since she returned to the company in January. I guess this is where things change. Someone is going to get their ass kicked. ‘Nuff said!

And there you go. I hate that I had to do this nearly a week early, but those damn spoilers. Thank you for reading. Any comments, thoughts, questions, or predictions you’d like to make, feel free and drop a comment in the comment section, message me at my e-mail of Doug28352@yahoo.com, or talk with me on Twitter at @Doug28352. Follow me. I follow back. And now, I’m out of here. Take care of yourself and stay safe in this crazy world. Have a great 4th of July and be good. I’ll see you at the matches. 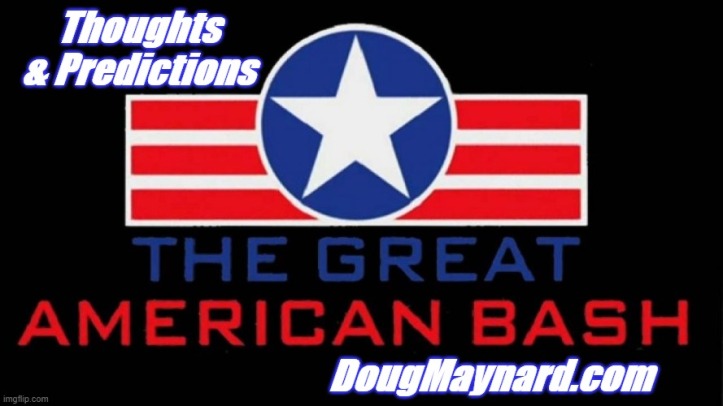