Coming up on Sunday night, live from the WWE Performance Center in Orlando, is WWE Extreme Rules. Are you ready for a few predictions? Let’s do this…

WWE Champion Drew McIntyre vs. Dolph Ziggler with a stipulation to be announced.

I didn’t watch Smackdown last night so I have no idea if Dolph announced his stipulation or not, but to be honest, I don’t think it matters all that much. If Dolph was facing Braun Strowman, I’d say there’s a chance of Dolph winning and becoming the Universal Champion, but against “The Chosen One”, it’s just not going to happen. It’ll be a good match and there will be some drama, excitement, and close calls, but at the end of the night, everything on RAW is in a holding pattern until the pandemic ends and things get somewhat back to normal. Dolph will look great and do great, but at the end of the night, it’s Claymore and pin from the champion.

I’m slacking because I haven’t been following or keeping up and have no idea what the “Swamp Fight” is supposed to be all about. It’s the cinematic match of the evening and I expect will be all movie-ish and all that crap. Bray is a fascinating character and I think he was screwed as the Universal Champion in regards to the Goldberg situation. Braun as champion has been boring. Expect a new “Wyatt Family” to emerge from the depths of the swamp (Bo Dallas perhaps and maybe even Joe Hennig if we’re lucky?) and a title to change hands.

No one is ready for Asuka. Sasha has been awesome as of late, but Asuka is the Empress of Tomorrow and of RAW. She’s keeping that belt!

So if Sasha loses her match and Bayley retains her title, that might cause some discourse between the tag team champions. The discourse between Sasha and Bayley is always fun to see. Nikki is looking great as of late, but I don’t see her winning the title here. Maybe some “help” from Alexa can backfire and we can get some good Nikki versus Alexa action as a result. But Bayley remains the champ.

Apollo as the champion has been boring to me. I like the idea of MVP with one last run and maybe a way to create some dissension between him and Lashley as well. What if MVP is too distracted by being the United States champ to help Lashley obtain his goal of a match with Brock. What would happen then? Look for a new champion.

Rey Mysterio vs. Seth Rollins in “An Eye For An Eye” Match.

Did we ever figure out what an “Eye For An Eye” match is supposed to be? I guess they may have explained it, but I probably wasn’t paying attention. I think this all comes down to Dominic. He’s protected by his dad all the time and there comes a time when it gets old and it’s time to step out of the shadow. Think Ric and David Flair. Rey looks to win, but Dominic turns on his father, costs him the match, and becomes a part of the alliance with Murphy, Austin Theory, and the Monday Night Messiah, Seth Rollins. Does a kid turn on his dad? Dastardly! It’s going to happen though. Watch and see.

Devon, I mean Big E, get the tables. I’m bored with the New Day, but unless we see a return by Sami, who still has that IC title belt even though we have a new champion, to help his former partner’s in crime, we’ll keep the current champs as the champs. Sami back on TV? Actually, I like that idea and they need to do something to swerve the fans and create some excitement. Make it happen, Vince. Sami comes back, helps Shinsuke & Cesaro, and we get some new champions in the process. Works for me.

The Jeff Hardy versus Sheamus “Bar Fight” has been pushed back to next week’s Smackdown so I wouldn’t be surprised to see WWE add another match to this show for the Kick-Off event, maybe a Cruiserweight title match or, based on the ending of Smackdown last night, a match with Baron Corbin versus Matt Riddle. Hell, I’ll call it right now.

So there you go. And that’s all for me. I have to go to work now for a day of selling booze and fine spirits. Have you ever tried Creek Water Whiskey? I did a review of it yesterday at the site. It’s available here: https://dougmaynard.com/2020/07/17/tossing-salt-review-creek-water-whiskey/. Check it out if you get the chance and if you’re in a mood to drink some kick-ass alcohol, come to the ABC, see me, and get some today. You won’t regret it and I’ll be there until 7:00 pm.

Any comments, thoughts, or questions to ask, drop me a line and let’s chat. Will you be watching WWE Extreme Rules? Who do you think will be winning and losing on Sunday night? Let me know in the comment section, at my e-mail of Doug28352@yahoo.com, or on Twitter at @Doug28352. Add me and I’ll follow back. And now, I’m out of here. Until the next time, stay safe and be cool. I’ll see you at the matches. 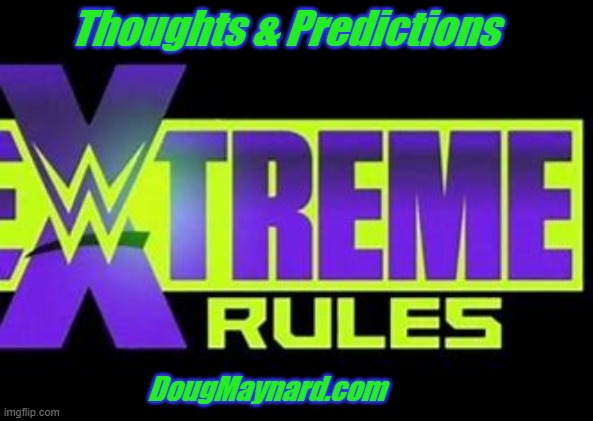