I have roughly about thirty minutes or so to kill before I go to work. If that isn’t a cue to do a quick edition of the Ultimate Wrestling Q&A, then I don’t know what is. The questions are from Maxwell and The Cheese. And I’m providing the answers. Let’s do this…

Shelton has been misused and not used at all for far too long. I’m glad to see him getting a little push. And while the 24/7 Championship is not the WWE or Universal Championship, it’s better than nothing. Look what it did for Mojo Rawley and Riddick Moss? Okay, bad example but I am glad to see Shelton being used. Hopefully, this will lead to bigger and better things.

Who’s on your Mount Rushmore of favorite factions?

Do the Hollys (Bob “Hardcore” Holly, Crash, Molly) belong in the WWE Hall of Fame?

Absolutely. Hardcore had a solid career as a strong mid-card wrestler. Molly had an excellent run as well and she continues to help train wrestlers even today. And Crash? Gone far too soon and definitely missed. Inducting the three as a unit would be a great way to make sure all three get the love and recognition they deserve.

Is Konnan right that Kenny Omega “failed on American TV”?

I don’t know if Konnan is right or not, but Omega hasn’t impressed me yet since coming to AEW. Of course, he didn’t impress me much in Japan or anywhere else either. I don’t know if I’d call him a failure, but he has absolutely not lived up to what everyone was expecting or hoping for as of yet.

Is MJF the “franchise” of AEW?

If he says he is, and he does, then who am I to argue? Did you know he’s better than you? Well now you do.

As much as I like Gallows and Anderson, this one goes to Brody and Hansen. No doubt in my mind at all about that.

Why is there a “fuck, kill, marry” here, and while does it have to be these three skanks? Oh vey! Fuck would be Nyla because she/he’s a transgender and there might be something there to keep my attention. Kill would be Tammy Sytch because she’s essentially a waste of space and air. And marry would be Sable because she has all that Brock Lesnar money and what’s hers would be mine, lol. Isn’t that how it works?

Who would you like to see Asuka defend the RAW Women’s Championship against?

How about the return of Mickie James coming back to challenge Asuka for her title. That could be fun to see. And I’d love to see a one-on-one with Asuka versus Ronda Rousey if she ever comes back. That could be cool too.

And there you go. My thanks for reading. Any comments, thoughts, or questions to ask, about anything at all, drop me a line in the comment box, at my e-mail of Doug28352@yahoo.com, or at Twitter at @Doug28352. Until the next time friends, stay safe and watch out for the crazies. I’ll see you at the matches. 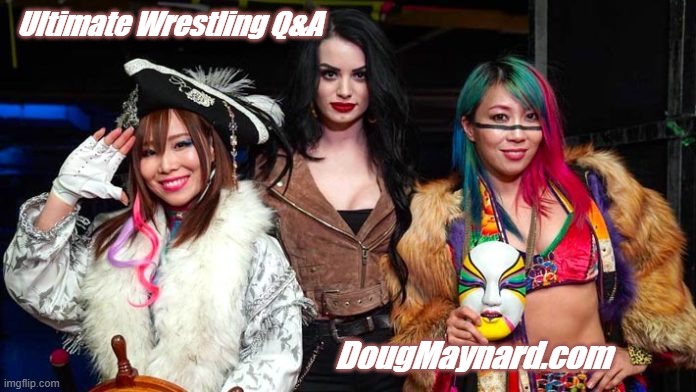