It’s the Ultimate Wrestling Q&A. This edition is dedicated to the memory of Chad Lowery, an incredible young man who passed away yesterday. Gonna miss you bud. Let’s do this…

Who are some wrestlers you’d like to see Cody defend the TNT Championship against?

If AEW is going to continue to bring in wrestlers for one-shots as they did with Eddie Kingston, the possibilities are endless. I think the names I’d like to see sooner rather than later would be “The Masterpiece” Chris Masters, Carlito Colon, Brian Pillman Jr., Timothy Zbyszko, Cody Hall, and Shawn Daivari. That’s a pretty good list to get things started.

Would you ever like to see AEW do something like Saturday Night Main Event? What would you call it?

If AEW could get a deal as the WWF had with NBC, that would be a great opportunity for the promotion and I definitely would like to see it happen at some point. As for the name, so long as it’s catchy, insightful, and draws the attention of the target audience, almost anything would work. How about “AEW Thunderstruck!”

Thoughts of Aubrey Edwards as an AEW referee?

A decent referee when she’s actually doing her job and calling a match rather than trying to be a personality and character. Her interactions with Jericho are funny. Her inability to do a ten-count of five-count or even a three-count with any kind of consistency is a bit on the annoying side. She’s different, unique, and I expect that within a year, she’ll be a wrestler or a manager instead of wearing the striped shirt. I could see her being a modern-day Danny Davis character for Jericho and his Inner Circle.

When you think “ECW”, who’s the first wrestler that comes to mind?

Paul Heyman, but he’s not a wrestler. For me, it’s Tommy Dreamer.

No ring or arena could hold those two massive egos and there is no way either of these men would agree to do a clean JOB for the other. It’s going to be a double-disqualification or double count-out. And if the stipulation was added that there were no DQ’s or count-outs, then there would be others getting involved. Dusty and Hulk would end up “teaming up” to vanquish and drive off the intruding parties.

A big man with a great look. He was legit scary as hell. A great wrestling character with only one minor problem. His matches sucked and he was not very good in the ring. That’s why he never stayed in one area too long. He could come in, do some shots, and leave before the fans got tired of him. Best in small doses would be the best way to describe the “Master of the Heart Punch!”. From what I understand, he was a nice guy outside the ring and always a joy at the fan conventions and autograph signings up until his passing a few years ago. He took a great look and had a great career as a result. RIP Douglas “Ox” Baker. You are a true legend in this business.

And there you go. My thanks for reading. Any comments, thoughts, or questions you’d like to ask, just drop me a line in the comment box below. I can also be reached at my e-mail of Doug28352@yahoo.com or on Twitter at @Doug28352. Give me a shout and let’s chat. Until the next time, stay safe in this world of crazies, and don’t forget to support your local Indy wrestling companies and wrestlers. I’ll see you at the matches. 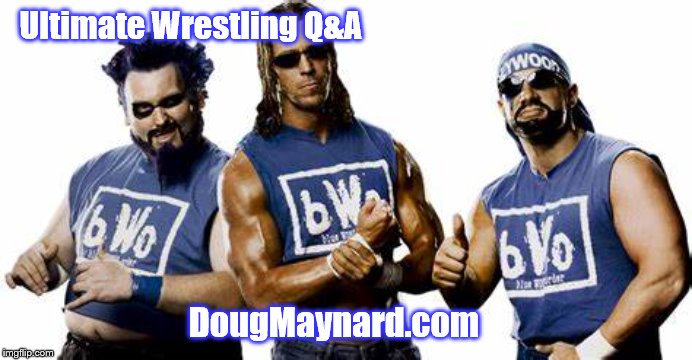