One of the more interesting people that I follow on Twitter is a man named Tyler (The Ghost) Casper. (@tyler_casper) Check him out and give the man some love and a follow. Now, what was I saying? Oh yeah, he asks a lot of questions. And the regular readers of this site know how I am about questions, right? So I went down his Twitter feed and copied several of the most recently asked questions. And now, for your reading pleasure, it’s time to provide a few answers. So are you ready? Let’s do this…

What is something you don’t have a lot of faith in?

People. Not all people of course, but the vast majority of humanity isn’t what it’s cracked up to be. Our so-called leaders in Washington and Raleigh also top of the list of worthless waste of space.

What do you think the percentage of malnourished (not starving) Americans is?

I’m not sure, but it’s probably pretty high. Everyone lives on junk food and crap full of preservatives and chemicals. No one knows what fruit or veggies fresh off the farm is. We all look better than ever these days, but the price we’re paying for that, oy vey!

Do you know the meaning of your name?

I remember looking it up many years ago, but I can’t remember now what the meaning was. I’ll just take a guess and say “awesome dude with great skills”.

What is a color you associate with yourself?

What would you do if caffeine became an illegal substance?

I would be a criminal. I like my Dews.

How is it that there is now a building supply shortage?

It’s all part of the Deep State conspiracy to make America a living hell, develop a socialistic government, and get rid of President Trump.

What is your favorite spy show?

Hell, I rarely watch TV at all anymore so I don’t even know what “spy shows” are on. I guess I’ll go old school with “The Six Million Dollar Man” and “The Bionic Woman”. Steve and Jaime were spies for the OSI, right?

If you were a weapon, what weapon would you be?

I’d be a bat, of the baseball variety. Them things hurt!

If you were a candy bar, what kind would you be?

Snickers because I satisfy.

What is your favorite type of footwear?

I like the socks. No shoes, but just socks.

Have you ever been to a nude beach?

What is your favorite hat style?

No hats for me. Just let the hair blow in the wind.

When was the last “All Nighter” you pulled?

A couple of weeks ago at the motel. I needed a night to unwind and get away from everyone and everything. And between the beer, my phone, the neighbors and Grindr, I never bothered sleeping.

Have you ever had a parrot?

Nope. I’ve always been a cat person and if we had a bird here, he’d probably end up as dinner.

Have you ever ridden in the back of a police car?

I’ve done a lot of things in the back of a police car. I love a man in uniform. But yes, being in custody and taking that ride to the jail is among the things I’ve done in a police car. And it sucked!

How many best friends do you have?

I don’t have a “best friend”. I have family who is not actually related to me but are still my brothers and sisters (or bro-son as the case may be). Actually, the Outlaw K-Mak would count as my best friend. He’s also my bro-son and a cool dude, but he’s the only person outside of work that I actually hang out with at all anymore. Poor guy. But he’s stuck with me and I loves him (in a totally hetero-way of course).

How many school reunions have you been to?

None. And my 35th is coming up in September. And guess what? I probably won’t be going to that one either.

Have you ever had a nightmare you couldn’t wake up from?

Yeah. It was called working at Nic’s and lasted for almost five years. Don’t get me wrong. My co-workers were great, but the customers and the store? It was hell every night.

What is the best eye color?

Green eyes always get me in trouble, but I appreciate all eye colors. A pretty set of eyes and I’m doomed.

What is the most annoying children’s song?

What is the most annoying children’s movie?

I hate the Smurfs. They make me want to smurf!

What was the longest time you’ve ever had a song stuck in your head?

Four years. I hate this damn song, but I love it at the same time. I want to punch these two that the song talks about. Damn a Pina Colada.

Where is your favorite vacationing spot?

Give me a quiet motel room with a sexy man and it doesn’t matter where we’re at. I am partial to the beach, during the winter and fall of course.

What is the most out of character thing you’ve ever done?

My character is constantly evolving so everything is appropriate and fits for that particular time or incident. There was the time I killed that man in ‘Nam, but we don’t talk about that. He stole my Juicy Pop.

Have you ever used an iron and ironing board to straighten your hair?

If I did, I would burn my head. That means no.

If it were real, would you want to go to Jurassic Park?

And there you go. My thanks to Casper for the questions and to you, the reader, for reading my little post. Any comments, thoughts, or questions, please feel free and drop me a line. I can be contacted via the comment box below, at my e-mail of Doug28352@yahoo.com, or on Twitter at @Doug28352. Until the next time, stay safe and watch out for the crazies. By the way, ALL LIVES MATTER! I’ll see you on the flip side. Take care. 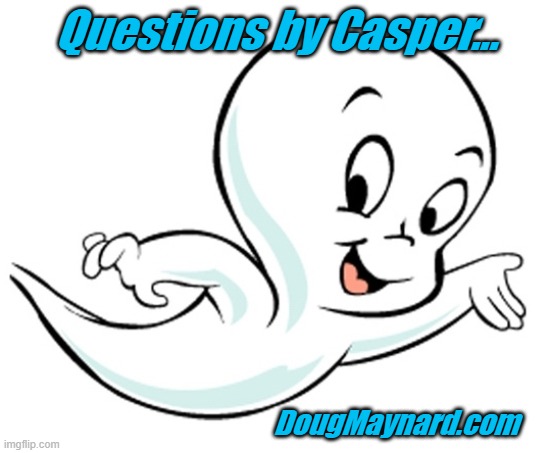