More questions of a wrestling nature. It’s time to do some of that “Wrestling Q&A” that y’all know and love so well. the questions come from the world of Facebook and more specifically, the KoK. And I’ve got the answers. Let’s do this…

How would you book Curt Hawkins & his “losing streak”?

Keep it going and let him lose more and more. He’s building a good following as it happens so hype it up. And finally, let a big name like Cena or Orton or Brock or even a returning Batista for example just give him hell about it. So Hawkins is fed up and ready to quit and retire and signs for “one last match” against the big named wrestler at a big event like Royal Rumble for example. And surprise, Hawkins takes a beating from start to finish, but in the end, he wins the match. Instant star is born and a great story for the fans. Or hell, just book Hawkins to win either Money In The Bank or the Royal Rumble. That’ll work too.

Is Abyss a good pick for the Impact HOF?

He’s been there pretty much since Day 1 and he eats, sleeps and bleeds (literally) TNA / Impact Wrestling. He’s a great choice for this honor. Yes!

Who are your all time top five ring announcers?

Ring announcers” Lilian Garcia, Howard Finkel, Justin Roberts, Gary Michael Capetta and the AWA’s Larry Nelson. Not for his announcing, but more for his antics instead. He was a trip.

If Anthem ever decides to cut their losses and get out of the wrestling business, I think that WWE will be first in line to buy the company just for the video library. I oculd easily see an “Impact” section on the WWE Network.

Should Stephanie McMahon wrestle at the Evolution PPV?

No, I don’t think so. I think she should be there though and have a “hired hitwoman” to face Ronda Rousey in an attempt to get revenge for Ronda’s repeated humiliation of her though. And then, after acting as a manager and watching her woman lose, Steph can have a confrontation with Ronda and get beat up again, thus making the fans happy, but not having to force the fans to watch a Stephanie McMahon match. It would be better than having to watch the Bellas wrestling though. Hmmmmm…

Should David Arquette be inducted into the WWE Hall of Fame?

Into the Celebrity Wing, I would say yes. He’s far more deserving than most and is actually a true fan of professional wrestling unlike many others who just use the WWE to get a paycheck and some work. Arquette also has that WCW World Championship thing going for him, love it or hate it and that’s a big bonus in his favor. And if you factor in that he didn’t take a dime for the work he did for WCW and gave the money he was paid to the family of Brian Pillman, that alone shows what a class act and stand up guy Arquette is. So WWE Hall of Fame? Sure, why not. He certainly deserves it more than Drew Carey or Snoop Dog and that’s for damn sure.

Now that the concussion lawsuit has been thrown out, should WWE extend an olive branch to the wrestlers who were named in the lawsuit and welcome them back into the WWE family / fold?

I think that it depends on the wrestlers we’re talking about and how malicious they were in their comments towards the company and just how important they were and are to the WWE and it’s history and fans. I think that every wrestler who was part of this lawsuit should be looked at on a case-by-case basis and the reasons they were part of the lawsuit, their current situation, how far are they willing to come meet the WWE in working together again and then take it from there. I expect to see a few names welcomed back and there are some, such as Billy Jack Haynes, Bryan Clark, Scott Steiner, etc, that I expect will continue to be blackballed by the WWE. Each person should be judged by their own merits and situation.

And there you go. Thoughts, comments and any questions welcome and appreciated. Until the next time, take care and I’ll see you round. Have a great one. 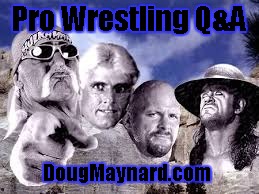