Coming up on Saturday, November 17th at the Staples Center in Los Angeles, CA, it will be NXT Takeover: WarGames. With four exciting matches announced for the event, It will be streaming live on the WWE Network. And of course, that means it’s predicition time. Let’s get right to it, shall we?

It’s hard to believe that The Velveteen Dream is the same kid who was on Tough Enough a few years ago and was so bland on personality, but look at him now. Patrick Clark was reborn and has come so far, nothing can stop him now. He’s a future star of epic proportion working his way through the ranks and the future is unlimited in what this man will be able to accomplish. And Ciampa? He’s another who was thought of as just a tag team wrestler in DIY, but he’s just gotten better and better each and every week and is a top guy, ready to come to the main roster at any time now. So will Dream accomplish his own dream and become the NXT Champion or will Ciampa continue to keep his tight grip on the company’s top prize? I like Dream and I think it will be a damn good match from start to finish, but I don’t think we’re having a title change in this match. It might happen down the road, but this feud still has legs and they’ve only began to tap the surface of what these two men can do against each other. Look for some shenanigans, but Ciampa will manage to steal a win and retain his title.

It is still surreal to see a War Games match at a WWE event, even if it is just NXT. It’s just a matter of time before it gets used on the main roster or at least I hope so anyways. Talk about a brutal and fun match to watch. This should be it and in an event filled with what should be great matches, I think this one is liable to steal the show. I don’t really see Ricochet, Dunne and the Raiders as a unit and real team. I do see Cole and his partners, the Undisputed Era, as one mind and one purpose. But that never worked for the Horsemen either, did it? The Era should win, but since I have a heel (Ciampa) winning the main event title match, I’ll go the other direction here.

Everything that I said about Ciampa in my previous comments can be said about Gargano as well. Talk about really stepping up the game and evolving into a top star ready to work and dominate on the main roster, Gargano is there. And Aleister Black, he’s just so damn good as well. This match will be a highlight reel from start to finish and they’re going to try and steal the show. No doubt about that. I think Gargano could use the win more to put him back in contention against his former partner so I’ll go with him for this one. It won’t be easy and both men will bleed, sweat, walk that aisle and pay the God o’mighty price. And Gargano squeaks out the win at the end.

We talk about how good Charlotte, Becky, Asuka, etc are on the main roster, but these two women are just as good and ready to be called up just as well. Their match at Evolution was off the charts and now we get the rematch. I have no doubt that both Baszler and Kairi are going into this match with a message for the women at Survivor Series the next night. “Hey, watch this!”. I’m not sure how it should go here. Basler lost her NXT title originally to Sane and then won it back at Evolution so this is the rubber match, the third in the series if I’m correct and it could easily go either way. I think we’ll see Baszler retain her title here and take that legendary trip “to the pay window” as Dusty Rhodes used to say. Sane will give her a fight and the match of a lifetime, but when the smoke clears, Baszler will retain the gold.

And I guess that’s all for now. Who do you think will be winning and losing at NXT Takeover: WarGames? Tell me your thoughts and predictions for this event. Thank you for reading. And with that, I’m out of here. Have a great one and I’ll see you again very soon. 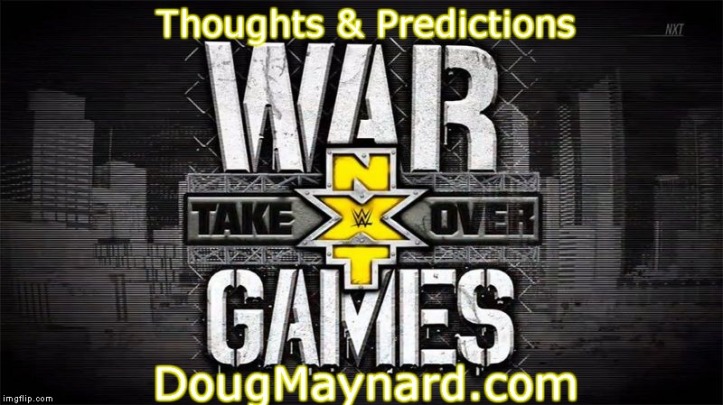