It’s time for another glorious edition of the Wrestling Q&A. The questions today come from my buddy, Matt and he seems to have a thing going about the WWE Hall of Fame as all the questions he sent me address that particular topic in some way, shape and form. Works for me though and I appreciate the questions, my good Sir. Let’s get to jumping and do this on this wet and cold Sunday morning.

1. Which team will go into the WWE HOF first? The British Bulldogs or the Hart Foundation?

Both teams are extremely deserving and should be inducted at some point, but with both members of the team having passed away, Dynamite Kid only a few days ago, it will be a longer wait for them. With the Hart Foundation, it would be easy to have Bret Hart and Jimmy Hart show up and then have Natayla represent her father and WWE could get more moments out of it and make it bigger part of the Hall of Fame. When it’s not the actual wrestlers and just family members representing the honored person, it’s not as exciting for the wrestling fans and not as easy for WWE to market. That shouldn’t matter, but it does. I expect that we’ll see The Hart Foundation inducted at some point on the main show, while the British Bulldogs tag team, while equally as deserving, will be slid in as a “Legacy Inductee” or not nearly as much fan fare or publicity.

2. Should Larry “The Axe” Hennig be inducted into the WWE Hall of Fame?

While “The Axe” has definitely had a memorable career and one worthy of note as a multiple-time Champion in the AWA and a former tag team champion with the legendary Harley Race as his partner-in-crime, does the bulk of his career qualify for the WWE Hall of Fame. Not really. Hennig was a great wrestler for his time, but the only thing that 98% of the modern world knows him for is being the father of WWE Hall of Famer Mr. Perfect and the grandfather of current WWE Superstar Curtis Axel. I can easily see the WWE using the “Legacy” label and inducting THe Axe that way as a favor for his family, but as part of the main class, it won’t happen nor should it.

Just some random names off the top of my head would be a headliner in The Undertaker, with the rest of the Class of 2019 being The Midnight Express w/ Jim Cornette, Molly Holly, The Hart Foundation, Kane, Rick ‘The Model’ Martel, Lex Luger and Ivan Koloff (finally) and Cyndi Lauper as the Celebrity Inductee. I could be wrong of course and probably am, but these men and women would be my picks.

4. Should Ted Turner be inducted into the WWE Hall of Fame?

Should Ted be inducted. He was the man responsible for putting wrestling on his station and starting the cable boom. He’s the former owner of WCW and in many ways as responsible as Vince McMahon for making wrestling acceptable and as big as it is today. Absolutely he deserves a spot. Will he get one? Nope. His health isn’t what it once was so he’d unlikely be able to appear in person for the ceremony and also, he kicked Vince McMahon’s ass for a long time. Does Vince hold a grudge? Yep, I think so. It would be a big deal if it was to happen and I wouldn’t really be shocked, but I seriously doubt it ever will.

5. If WWE was to replace Jarry Lawler as the host of the WWE Hall of Fame ceremony, who would you have take his place?

I hope that I never see this happen, but let’s be honest. Jerry is getting older, although he never seems to age and he’s already died on live TV once and eventually, the day will come that someone else will take up the mic and assume the mantle that Lawler has held for so long. Who would I have take his spot? Well, the only name that makes sense to me is still a relatively young man with almost thirty years of wrestling behind him. He’s a rock star, a TV personality, a podcast host and the Ayatollah of Rock & Rolla. He’s even hosted a few music awards show and appeared on Dancing With The Stars. Or was it that Singing show? Doesn’t matter really because he did it and did it well. Who else has the personality and charisma and background for such an honored role than the one and only Chris Jericho? Any objections? I didn’t think so.

6. If WWE was to start inducting “matches” into the Hall of Fame, what match should be the first one inducted?

I hope it doesn’t come to that because as much as I appreciate a great match, it’s the wrestlers themselves who bleed, sweat and create these epic events that we all love and enjoy and there are still far too many deserving wrestlers that have yet to be honored and appreciated. But if WWE did decide to do matches as part of the HOF Inductions, two immediately come to mind and they’re both no-brainers. The Hell In A Cell Match between Undertaker and Mankind where Mick Foley took his infamous fall off the cage and went from being a great performer to being a legend in terms of tough and crazy. And the other would be Hulk Hogan versus Andre the Giant at Wrestlemania III. It was not a great match from an in-ring point, but it was Hulk versus Andre and the build for this match and the legacy it has left behind, it is definitely one of the most memorable in WWE History. Those two would be my picks for the initial inductions and more could follow later.

And there you go. My thanks for reading. Questions, comments and thoughts welcome and appreciated. Until the next time, stay warm and dry. Have a great one and I’ll catch you later. 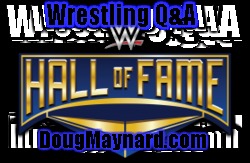