The questions have been stacking up in my in-box over the past few days as I’ve had a major episode of slackness and “I don’t wanna”. Yeah, depression and anxiety can be a bitch sometimes. But things are on the upswing and it’s time to pull a McGruff and take a bite out of crime, but more like Matilda taking a bite out the wrestling related questions. The questions are from Matt, Jenny, The KoK, Facebook and a few others. I have a lot to tackle so I’ll probably split this up into two or three different columns. And then it will be time to tackle the more random, non-wrestling questions. Did I mention that a “Ten Days of Dougie” is coming up in a couple of days too? Well, it is. And that’ll be talked about later on. For now, it’s all about the world’s greatest sport. Let’s do this…

Before I get started, I want to dedicate this to “Mean” Gene Okerlund, long time interviewer and pitchman for the AWA, WCW and WWE. Prayers and condolences to the friends, family and fans of this legendary iconic figure. Rest In Peace, Mean Gene. You will be missed Sir.

And now on to the questions.

Thoughts on the launch of All Elite Wrestling and what it means for Cody, The Young Bucks & Adam Page as well as wrestling in general?

It’s a big event for professional wrestling and everyone involved, be it Cody, The Bucks, Page and whoever else is working with the company. They are changing the landscape of the wrestling world and have as great a chance of success as anyone. They’ve secured financial backing with the owner of the NFL’s Jacksonville Jaguars and gave it a trial run with All In in Chicago, which was a smashing success by anyone’s standards. And now, they’re taking it to the next level. I don’t see how they’re going to make it without a major TV presence, but I’m sure that they’re working on that. Also, the lack of an experienced mentor for the booking and promotional end of things kind of concerns me too, but there is probably someone behind the scenes that we aren’t aware of yet who is probably advising Cody & friends and helping things out on the legal end of things. I think this is an exciting time for pro wrestling and I wish everyone at AEW much success in this venture.

How would Chyna have fit into today’s WWE and women’s wrestling?

In many ways, Chyna was twenty years before her time and I think that she would fit in very well with the women of today’s WWE as compared to the Divas of the Attitude Era. Can you imagine Chyna versus Ronda? Or Chyna versus Charlotte? Or even the botchfest that would be Chyna versus Nia? The women today are bigger, stronger and far better than the majority of the women that Chyna had to compete against in her days of competition in the WWE. She would fit in well and I don’t think her total domination, that she enjoyed in her day, would be quite as assured these days.

Baby Doll versus Chyna? Who wins?

I love Baby Doll and she should be in the WWE Hall of Fame. She was a big woman and had some wrestling matches as Nikla and Andrea The Giant before coming to the Mid-Atlantic region as Tully Blanchard’s “Perfect 10”, Baby Doll. So she’s no one to be taken lightly and in a real fight, could probably kick the ass of most guys. But then you have Chyna who was a physical freak in many ways and was quite a accomplished wrestler, against both men and women, in her own right. Baby Doll could kick Jim Cornette’s ass for sure, but against Chyna, I’d have to go with the so-called “Eighth Wonder Of The World”. Winner would be Chyna.

Should Jim Cornette be brought in to manage The Revival?

Jim Cornette has spoken many times of his respect for the team of The Revival and if Cornette was to come to WWE to work as their advocate, it would be a big move for that team and a great surprise for all of the WWE Universe. But Cornette doesn’t manage anymore. He doesn’t have any desire to travel and live on the road anymore. And while they’re currently on good terms, Cornette and the WWE management would be an extremely dangerous mix that would explode sooner rather than later. It would be fun to see Corny back in the WWE and on TV as a manager again, but the cons far outweigh the pros and in the long run, would probably not be a good idea.

DJZ has departed Impact Wrestling? Will he end up in NXT / WWE?

I hope so. ZJZ has come a long way since his early days as Zema Ion and has really grown as a talent and in-ring performer. Plus, he’s sexy as hell. He’s good in the ring and has personality and character. I think he’d do well in NXT and in the WWE as well.

While Disco would never be an option to be the World Champion, he was a good wrestler who could have a solid match with anyone. He was good on the mic and his character, which by all rights should have killed his career, he managed to get it over and had a pretty strong following. He could work tag team (as with Alex Wright and the Dancing Fools) or singles (as the WCW TV Champion) and his matches were always entertaining. So to call him a solid mid-card performer, I think that’s a pretty safe call.

Who was your top unappreciated mid-carder?

Impact allows workers to work almost anywhere else. ROH as of late has been signing talent to exclusive contracts. Which mentality is better for a wrestling company?

If a company can afford to keep everyone on contract and working regularly, then the ROH approach works best in my mind. It allows them to have control over their talents and keep them strong and on hand as needed. If a company can’t afford to pay their talent full time, as Impact can’t, then they have to use the option that they’re using. It’s not the best one, but it’s necessary and what they need to do. I think the ROH method promotes more unity and loyalty for the company and helps with the brand marketing too. It’s the better way of doing things.

Who? I had to go look him up to see who he was. Former NFL guy who worked with TNA and then came to WWE for a year or so and was part of ECW.
He was given a stupid fake name and wore a headband on his black, bald head. Brown was Bobby Lashley before there was a Bobby Lashley. He was about as charismatic as a bowl of cheese puffs and then left to spend time with his family and never came back. My thoughts? A failed venture by WWE that was a waste of time, energy and money.

Austin Idol eventually in the WWE Hall of Fame? Yes or No?

Austin Idol was a big star in Memphis, Georgia, Mid-Atlantic and Georgia back in the late 70’s and 80’s. A good wrestler and good talker. I remember his brief run here in NC and then he went on to have a legendary war, along with Tommy Rich, against Jerry Lawler in Memphis. Most recently, he was back and traveling with NWA World Champion Nick Aldis as his manager and spokesman. Austin was a big regional star, but I really can’t see him getting called by WWE and offered a place in the HOF. His career is worthy enough to be sure, but outside of the south-east, he’s not a big enough name. Maybe as a “Legacy Inductee”, but that would the only way.

And I guess I’ll end this here. I have a few things to do before it gets too late and need to run for now. I’ll be back later with more Wrestling Q&A as well as lots more of other stuff too. My thanks for reading. Any thoughts, comments or questions about wrestling or anything else, please feel free and let me know. Until the next time, take care my friend. Have a great one and I’ll catch you on the flip side. 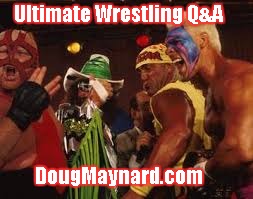