It’s the return of Wrestling Fact or Fiction. We missed a couple of weeks due to the fine folks at 411mania.com/wrestling not posting new editions of the FoF columns, most likely due to the holidays, but they’re back on track and thus, so am I. So are you ready? Let’s do this…

FACT: It’s been five years and it’s time to mend fences, let sleeping dogs lie and do one more major cash in and make that big payday before it’s too long. Punk tested the waters with an autograph signing at the All In weekend and it showed that the wrestling fans want Punk to come back. The chants that still go on at every WWE taping show this as well. If I was Vince McMahon, I would make a major offer to Punk to have him return on a “Brock-style” deal to coincide with the huge Fox debut of Smackdown Live in the fall of 2019. There is no name in pro wrestling that would be a bigger surprise and get people talking more. Punk has proven that he doesn’t need the WWE, but the time to be stubborn is over with. I think that Punk will be back and Vince McMahon will be the one to extend the olive branch. And when he does return, he’ll bring the “pipe bomb” with him and the WWE will never, ever be the same again.

FICTION: If there was one thing I didn’t mind, it was the idea that when a champion loses a title, he gets an automatic rematch. It was an easy crutch and led to WWE doing too many matches over and over at the pay-per-views, but still, the former Champ should get a chance to get their titles back. Instead of eliminating the automatic rematch clause, just tweak it a bit so that the rematch happens at the next TV taping, be it RAW, Smackdown or whatever. So the former champ gets a chance, the rematch is allowed, but it’s taken care of immediately and not dragged out for weeks and months to come.

3. Who is your favorite to won the Women’s Royal Rumble?

So long as it’s not Nia Jax, I’ll be cool with it. Most likely, it’ll be Becky, thus setting up a Becky versus Ronda match at Wrestlemania, but who really needs a Rumble win to get that match. Just have Vince or Stephanie make the match between the two official and it’s done, because (surprise) it’s best for business. But I’d like to see a surprise and maybe have Bayley win. She’s damn good and very under-rated since coming to the WWE main roster. I think a match with ayley challenging Asuka for the Smackdown Women’s Championship, would be very good and could steal the show. Yeah, I’m going with the Hugger here.

4. Who is your favorite to won the Men’s Royal Rumble?

This one is harder because most likely, the WWE will use the Rumble to push Seth Rollins and gear him up for the main event of Wrestlemania, but I’m so tired of Seth and it’s way too predictable. Drew is a good option as well, but it just strikes me as too predictable too. I hope it’s not Braun Strowman because I’m extremely tired of him. Let’s go for a dark horse surprise underdog. I think I’ll go with the U.S. Champion, Rusev. After all, the Rumble does take place on Rusev Day, right?

5. What is your excitement level for All Elite Wrestling?

I’ll say probably a 7 out of 10. I’m excited for the promotion and anxious to see where they go and what comes next, but I have my doubt that, without a major TV deal in place and someone with experience in marketing wrestling such as a Jim Cornette or Jerry Jarrett as their advisors, their ability to survive. So far, they’ve done everything right and I hope that they continue to do so, but it’s going to take a lot of luck, a lot of common sense and a lot of hard work to keep the ball rolling. I think they can do it and wish Cody, The Bucks and the rest the best of success. The hardest part will be to keep the product fresh and able to stand out from everyone else, but not to dig themselves into a major hole at the same time. That’s the part that worries me. But it’s going to be an interesting journey to witness and see how things go. Right now, I’m very intrigued.

And that’s all? Only 5 statements? Larry and the 411 guys are getting slack on me. Anyways, my thanks for reading. Any comments, thoughts or questions welcome and appreciated. And with that, I’m gone. Until the next time, take care and I’ll catch you on the rebound. Have a great night. 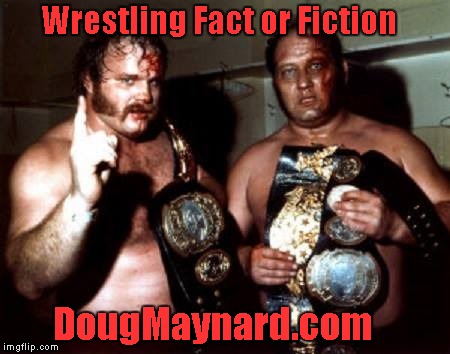