Good morning, my Peeps. It’s Saturday morning, way too damn early to be up and this is Day 4 of the infamous blog series that makes Nancy Pelosi want to stop flying on government planes and fly commercial, the one and only “Ten Days Of Dougie”. And it took me far too long to write that sentence. Maybe I should go get my glasses and put them on? I’ll be right back.

Let’s try this again. I went and put on my extra eyes and did my meds and now I am good to go and ready to tackle this bad mama jama. I have to do a rush job because of that annoying little thing called “work”. Another fun Saturday which means I open and work until closing. A fun 11 hour spectacular filled with selling liquor, stocking liquor, selling more liquor and talking about liquor.., and I don’t even drink anymore. Go figure. But I love the job, get to see some fantastic people, get to hear all the latest gossip and all in all, it’s not all that bad. Makes me want to drink though for some reason? I wonder why? Hmmmm…

So as I said, time is limited and I need to get busy so I can go shower and get ready for the day ahead. I guess that means to can the small talk and just get straight to the world famous and even better than cheese, “Magic Bag” and see what’s up and on the agenda for today. So let’s go for it. We have: Lie, Mall Rats & Training. Wow, some great ones today. I need to find some new topics to put in the bag. I’ll work on that today while I’m at work. So far for the past few blogs, these have been some real snoozers. I guess that’s the chance I take though when I pick topics randomly out of an old Crown Royal Bag. But these will be simple and this will be short and I won’t even make any “short” comments about my on-again, off-again ex, Danny either about the “short” thing. He’s still a sexy beast even if he is an asshole. And he’s not “short”. It was just cold. Very very cold from what I remember. I’m kidding. It wasn’t cold at all. Oh well. Let’s do this…

A lie is when you don’t tell the truth or when you’re a politician or news reporter and open your mouth. It’s fake, phony, untrue and not a good thing at all. The thing about a lie is that when you lie, you have to remember that lie as not to get caught being a liar and then, usually more lies follow to cover up the first one and it just balloons into a big messy mess that could have and should have been avoided in the first place. The truth isn’t always good to hear, but at least it is the truth and can be dealt with. Lies are just creating problems and headaches and may make things better short term, but in the long run, they’ll eventually catch up with you and let me tell you from experience, once that trust is broken, it’s never the same again. Relationships may continue, but it’s never quite right and there will always be that doubt when the person who lies speaks, even when they are telling the truth. How can they be believed? They lie once and they’ll do it again. It’s just how things go. It’s just the way things have to be. And if all could be avoided and everyone could be living in bliss and harmony, just by keeping it real and being honest. Bottom line is lying sucks. People who lie suck. So don’t suck. Don’t lie. Don’t do dat! ‘Nuff said!

Mallrats was a movie by Kevin Smith from roughly twenty-plus years ago. It helped to make stars out of Ben Affleck, Jason Lee, Joey Lauren Adams and so many others and was a great success. It gained a great following and is considered a cult classic. It’s also really good and entertaining and helped to cement the legacies of the characters known as Jay & Silent Bob from being just two odd drug dealers who hung outside a convenient store into being two more fleshed out and real characters (who kicked the crap out of the Easter Bunny, but then got thumped by a bunch of angry kids). Just a really good and entertaining movie. Did you know that Priscilla Barnes, who was once on Three’s Company, had three nipples? In this movie, she did.

But anyways, Kevin Smith was trying to get everyone from the original movie back together and do a Part II – Back to the Mall movie, but for some reason, it fell through and didn’t happen. And then the talk was about a limited series or something of that nature and that fell through as well. Smith seems determined to make it happen though in some way, shape or form and I hope that it eventually does. I’ll be the first in line to buy a ticket and I won’t even watch a bootleg first (probably). If you ever get a chance to see it, do so and look for Jason Lee to steal the show with a story about his cousin, Walter. And you’ll never look at the back of a Volkswagen the same way again… or Ben Affleck for that reason. I think I may watch that movie again tomorrow when I’m off work. Yes, I know I have about a hundred questions to answer that a couple of extremely awesome readers sent me (I asked for questions and damn, now I have plenty of questions), but I can multitask and write / watch TV at the same time. It’s what I do. Speaking of, let’s move on.

Here is how I train someone to work in a store. Show them the basics. Let them do it for a few minutes while I watch and see if they’re getting the hang of it or not. And then I vanish. I stay close enough to answer any questions and help if needed, but other than that, I let them find their own way and get comfortable without anyone hanging over them. Every cashier has their own style and method that works best for them. Let them find it. I do. It may not be the best way to train someone, but it works for me and seems to have worked for the past thirty five plus years as well. Luckily, I’m not the one that trains people anymore. I can if needed, but let’s not need to, okay? I’ll just be over here sipping on my Dew and making notes for my website.

And that’s it. Lame again, I know. But I’m off work tomorrow, Monday and Tuesday so I’ll play catch up on the Q&A’s and hopefully, these “Days Of Dougie” will improve as well. Or at least be longer with 85% more BS and rambling about things that have nothing to do with the topics I’m writing about. Hey, it’s what I do. You know you love it.

So have a great one. If you’re in Scotland County and need some liquor, come see me. I’ll be at the store until 8:00 tonight. Any thoughts, comments or questions, feel free and let me know. And I am gone. Take care and I’ll catch you later. 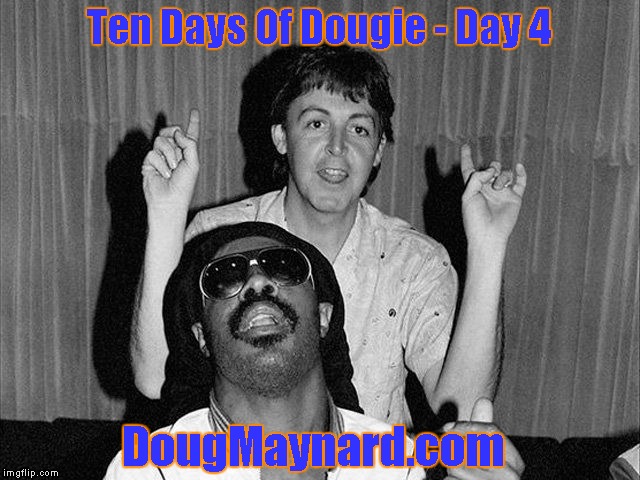