It’s time to play catch-up. Questions are from Matt and Jesse. The answers are from me. Let’s do this…

Thoughts on Bray Wyatt’s new character and his “Firefly Funhouse”?

I’m not sure just yet if I like this new variation of Bray or not. I am glad that he’s back on TV in some way, shape and manner and this is definitely an interesting way to reintroduce the one-time leader of the Wyatt Family to the WWE Universe, but how will it all transfer over to the future, I have not a clue. I guess that the puppet and the doll are manifestations of some of Bray’s associates, maybe Nikki Cross and Eric Young perhaps or even Lars Sullivan, but I’m just speculating and I guess only Bray and Vince know for sure. The next few weeks, as Bray returns to RAW and the ring, will be very interesting to see how a live crowd reacts to Mr. Wyatt’s Neighborhood. I hope that this all works out and turns out to be good for the man and his career, but as I said earlier, we’ll just have to wait and see where it goes.

Were you surprised to see Alicia Fox wrestle this past week on RAW?

This was, I believe, Alicia’s first wrestling appearance since the incident at the house show where Arn Anderson was fired after allowing Alicia to perform while she was allegedly intoxicated. And was I surprised? Absolutely. I guess she and WWE management have worked things out and everyone is satisfied enough that she’s allowed back on RAW. I’ve always been a Fox fan so part of me is happy for that, but it was indirectly her fault that Arn Anderson ended up getting terminated by Vince and WWE and I hope that matter has been taken care of and she’s been put on notice. Arn will be okay and I hope that Alicia doesn’t screw up any more. I would suspect that she’s on probation for right now though and if not, she should be.

He’s gone from being a tag team goof to a serious, dangerous wrestler in that ring with eyes on the big prize and a killer ‘Stache as well. Sounds like a good idea to me.

Thoughts on the WWE breaking up the team of Black and Ricochet?

They were not a regular team in NXT and were thrown together as a team when called up to the main roster. Though they are an incredibly effective and talented team, these two men are better off for now as singles stars and on different brands. This team split is a good thing.

Is it time for WWE to bring back General Managers?

I’m already sick of looking at Shane and Vince and Steph and Hunter. The idea for a “General Manager” for each brand wasn’t great, but it was better than being overdosed by McMahon R Us each week. Bring back the GM’s for RAW and Smackdown… please.

Are you excited to see Enzo and Cass in ROH?

I’m glad that they’re working and making a living and yes, they will add a new life and energy to ROH, but is excited really the right word? If they bring in fans to ROH and make the company money, I’m happy for them and for ROH. But that’s about it.

Two teams who started off as “brothers” and are pretty much together in everything. This could be a really fun match to see. Edge and Christian would win, no doubt about that, but it would be an exciting match to see and both teams would work hard and put on a show for the ages.

Thoughts on the upcoming “Crockett Cup” event by the NWA?

That event is taking place tonight, even as I write this, and I’m excited and happy for it to be happening. I wish I had thought about it in time to do a prediction column, but I lost track of time and had forgotten. This is a great move by the NWA to make old into new again and reach out to those fans that the world of “sports entertainment” has left behind, the real “wrestling fans”. I’m definitely interested in seeing how the PPV ratings and box-office goes for this show and see how the matches turn out. It’s a big night for the NWA and for all the men and women involved.

Do you think Brock Lesnar will be back in WWE to challenge for the Universal Championship again?

I think it will happen before too long. We have Crown Jewel coming up and just four months until SummerSlam, as well as Smackdown making it’s Fox debut in the Fall. It’s not if Brock will be back, but just when.

Is Shane McMahon’s “Best In The World” gimmick a shot at CM Punk by the WWE?

Absolutely. A McMahon using Punk’s nickname and tag line? If that’s not making it a personal shot, I don’t know what it. It’d be like HBK saying that he’s the “Best there is, best there was and the best there ever will be” or James Ellsworth calling himself the “most electrifying man in sports-entertainment” and “the Great One”. It’s very personal and very blatant as a shot at CM Punk.

A few weeks ago, Drake Maverick worked a dark match with EC3. Any chance they put them together?

It would be a great idea, I think. Maverick and EC3 have a great history and chemistry together in TNA / Impact Wrestling and it isn’t like they’re doing anything right now with either of them. Maverick is still the GM of 205 Live, I think, or did they eliminate that GM spot too like they did with Angle and Paige? But Maverick’s main job, as the manager of the AOP, is on hold as one of them is out with injury and EC3 is being wasted and squashed. Let them unite and create some magic. It can’t hurt and let’s be serious here, what else have they go to do?

And there you go. My thanks for reading. Thoughts and comments welcome, as are any questions for a future column. Until the next time, take care and don’t forget to support your local Indy wrestling company. I’ll see you at the matches. 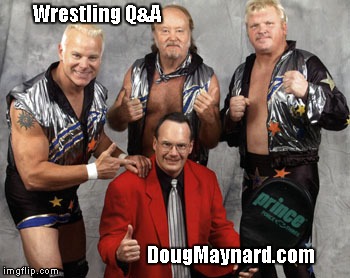