Are you ready for some of that always fun Fact or Fiction? The statements below come from the mind of Jake Chambers and the site, 411mania.com. And the opinions that are expressed afterwards, that’s just me. I’m feeling it so let’s just get right to it, shall we? And away we go…

Statement #1: AEW was the wrestling promotion of the year.

FACT: In less than a year, AEW has gone from an idea and the vision of several wrestling talents into arguably the Number 2 wrestling promotion in the United States. It has a prime time slot on a major cable network, many of the top stars of pro wrestling, Jim Ross and Tony Schiavone calling the action and a regular TV and pay-per-view schedule. It’s the real deal and has come further in a short amount of time than anyone expected or deemed possible. WWE is bigger, but AEW is the new kid in town and getting all the eyes and attention. If that isn’t worth taking note of, nothing is.

FICTION: So long as R-Truth stays healthy and active, the belt should be safe and secure, but once Truth is out of the picture, I tink interest in the 24/7 title will quickly fade, especially with the writers and WWE Creative. It’s a great novelty title, but there are far too many titles in WWE right now as it is and I think that somewhere down the road, the titles with the least history and meaning will be cleared out of the way to tighten things up. And the esteemed 24/7 Championship will be among the first to go.

FACT: ALL matches in NXT, WWE, AEW and wrestling in general tend to have too many near-falls and two counts. It’s the way of wrestling in2019 / 2020 and finishers don’t matter and selling a move is just an afterthought. NXT is pretty bad about this sometimes, but it’s just one company of many.

Fact or Fiction – Quick Hits
– one sentence is all you need for this FoF lightning round!

FICTION: So long as Ivory (Lisa Moretti) is still alive and Asuka is still active, they will always get my votes.

FICTION: Take a look at Juvi, even tough he’s older, Ricochet and Jungle Boy. Those guys are sexy beasts.

3. Brock Lesnar will be in the main event (last match) of Wrestlemania.

FICTION: Brock will be in the middle of the show somewhere and the main event will be someone who actually deserves the spot.

Statement #4: Chris Jericho has been the most overrated wrestler of 2019.

FACT: Jericho was and is the best choice to start off the AEW Experience as their first Champion, but he’s not what he once was and the skills are not what they once were. Jericho can talk and few people are better or even close for that matter, but thus far, he’s been all talk and while the promos are great as expected, the in-ring matches that have followed haven’t been memorable at all. Jericho is a legend and icon, but he needs to step back and reboot. The brain is still at a championship level, but the body is struggling to keep pace.

Statement #5: The best wrestling match of 2019 was Walter vs. Tyler Bate from NXT UK Takeover – Cardiff.

FICTION: It was a great match and an instant classic, but it wasn’t my favorite match for the year or even for NXT for that matter. How about the 2 out of 3 falls match with Gargano versus Cole at NXT Takeover: New York. Or hell, The Revival versus The New Day a few weeks ago. That was a clinic on tag team wrestling. Or hell WarGames whereTeam Ciampa (Tommaso Ciampa, Keith Lee, Dominik Dijakovic, and Kevin Owens) defeated The Undisputed Era (Adam Cole, Bobby Fish, Kyle O’Reilly, and Roderick Strong). That match was incredible. Those would be my picks for the best match of 2019.

FACT: This sounds and looks about right to me. Movies are the biggest money items and TV is always going to be up there as well. Music, at least the new crap that is passed off as music these days, is falling faster than Miley’s career once she became a twerking clown-shoe. Books are awesome, but no one reads anymore. It’s all Kindle and waiting for the movie. And wrestling, the world’s greatest psuedo-sport, is right there in the middle where it belongs. I’m not sure where this question came from, but the way you have the different aspects of life and pop culture listed, it makes sense and is accurate in my eyes.

And there you go. Any thoughts, comments or questions, drop me a line and tell me what up. My thanks to the folks at 411mania.com for letting me borrow their statements so I can give my own responses. Take care and stay safe. I’m out of here for now. I’ll see you at the matches. 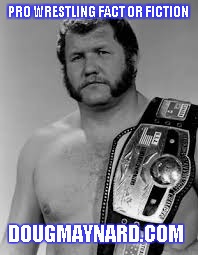