One of the more interesting people that I follow on Twitter is a man named Tyler (The Ghost) Casper. (@tyler_casper) Check him out and give the man some love and a follow. Now, what was I saying? Oh yeah, he asks a lot of questions. And the regular readers of this site know how I am about questions, right? So I went down his Twitter feed and copied several of the most recently asked questions. And now, for your reading pleasure, it’s time to provide a few answers. So are you ready? Let’s do this…

Have you ever used Skype?

I have on a few occasions to participate with some awesome SMF Cyberspace podcasts, hosted by my incredible and super sexy hetero-bro, Brent. To be honest, it confuses the hell out of me and I’d rather just tweet or IM or even just talk on a phone (and I hate phones!). But I have Skyped a couple of times and if necessary, I will do it again.

Have you ever used Zoom?

What is Zoom? Wasn’t that the real name of the Reverse Flash in DC Comics? I remember a show on PBS in the seventies called Zoom. I don’t remember watching it, but it did exist. I don’t even know what Zoom is although I can assume from the question that it’s a method of social interaction. I haven’t used it nor do I assume I ever will.

What is your favorite type of footwear?

Definitely the Twilight Zone. Remember Talking Tina? She was ruthless!

Who would win in a fight? Bruce Lee or Chuck Norris?

Chuck Norris. Bruce Lee is dead and even on his worst day, I think Chuck Norris can beat up any dead guy pretty easily.

They’re bigger and thicker and go better with big chunks of meat.

What are your thoughts on chicken fried steak?

I like it and think it’s good food. It’s heart attack waiting to happen food unfortunately, but it’s still some good stuff. Yum!

Have you ever gone fire fly catching?

Yeah, but we always called them lightning bugs around here. Used to do this often as a child.

What is the grossest thing you’ve ever seen a child put in their mouth?

Maybe a dog biscuit? Usually, we’re able to catch the kids before strange objects enter the mouth. The really gross things don’t come until after puberty and adulthood, like your boyfriend.

Do you prefer fish to be fried or baked?

I’m not a big fish person. I worked at a seafood restaurant for almost three years as a teenager and the things I could tell you about, you’d never eat fish again. But if I’m having fish, I prefer to have it fried.

What is your favorite deep-fried sandwich?

I have no idea. Maybe a chicken patty?

Did you get a polio vaccination when you were little?

Have you ever had shingles?

No, but I’ve seen others having to suffer and deal with them and it was not a pretty sight.

Do you have play dates for your pets?

No, my cat is too good to associate with other cats.

When was your last family reunion?

I can’t even remember the last time my immediate family was all in the same room? It’s been a while. And my extended family? Never, at least never that I was invited to. Maybe that’s something I should try to arrange and get my family, both by blood and by fate/life/choice, all together for a gathering. It could be a major nightmare, but it could also be pretty cool.

How often do you bathe your pets?

I don’t bathe Mouth. I want to keep my skin intact and my blood inside my body. He wouldn’t take to getting a bath very well.

What is the craziest fish story you’ve ever heard?

And there you go. My thanks for reading. Any comments, thoughts or questions you’d like to see answered about anything, nothing is off limits, drop me a line here at the site in the comment section, at my e-mail of Doug28352, or on Twitter at @Doug28352. I guess that wraps things up for now. Have a great night and stay safe. I’ll catch you on the flip side. 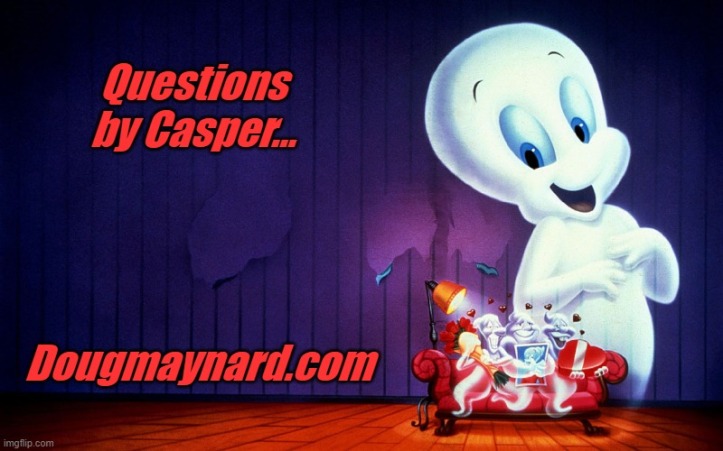