It’s the Ultimate Wrestling Q&A for Sunday, June 28, 2020. The questions are from the world that is Facebook. The answers are from me, Doug, your esteemed host with the most. Let’s do this…

Thoughts on Tim Arson, aka The ECW Zombie?

I was probably the only one, but I liked the ECW Zombie character that debuted on the first episode of WWE’s version of ECW (and got thoroughly trashed by The Sandman). It was a cool character and from I’ve heard Arson, the man who portrayed the character, was thrown together by Paul Heyman and Tommy Dreamer just minutes before the show was scheduled to start. Arson wasn’t bad as a wrestler either, but never really had any major success aside from the Zombie character which he continued to play until his death. He passed away in January 2015.

I honestly don’t know much about Quakenbush or CHIKARA aside from the mentions I’ve seen on the Internet over the years and Quakenbush’s reputation as a trainer. But I have read of the allegations against Quakenbush and this decision is probably the right call. His credibility as a trainer and promoter has been trashed and regardless of whatever excuses he may give, he can’t get those back. CHIKARA is now scorched earth so far as Quakenbush is concerned. The company had a good following and many fans, but there are always consequences of any bad deed, and CHIKARA coming to an end is one of those.

Best wrestler of all time who has NEVER won a World Heavyweight Championship?

The first name that popped into my head was Lord Steven Regal, aka William Regal. How he was never a World Champion at some point, I have no idea.

Should Christian be a WWE Hall of Famer?

Absolutely and it’s not a matter of should he be, but just when. He’s going in at some point. No doubt about that.

Which current active wrestler, from any company, could walk into AEW today & break the internet?

Triple H. Is he still active? Or Roman Reigns? No, I got it. CM Punk.

What’s the most villainous heel act/best-executed attempt at getting true heel heat that you’ve ever seen in wrestling?

I’ll give credit where its due. When Hulk Hogan turned on WCW and joined the New World Order, which was so unexpected and crazy, the fans were pissed! Also, I was recently on YouTube watching when Ole Anderson turned heel and went after Dusty Rhodes in the Omni in Atlanta in July 1980. The fans were ready to riot and it was a great moment in Georgia wrestling history.

And there you go. My thanks for reading. Any comments, thoughts, or questions you’d like to see asked, drop me a line here at the site, at my e-mail of Doug28352@yahoo.com, or on Twitter at @Doug28352. Let’s chat. And with that, I’m out of here for now. Take care of yourself and stay safe. I’ll see you at the matches. 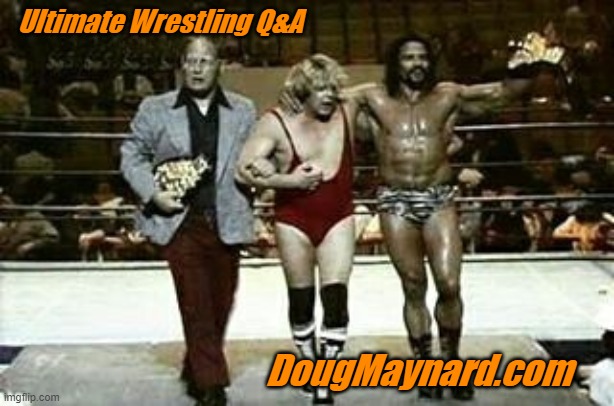